Pottawatomie County’s oldest radio station, KGFF, has had a lot of milestones since it first went on the airwaves in 1930. It’s most recent significant event was the September 2016 expansion to an FM band station, making KGFF available at 100.9 FM and 1450 AM.

Federal Communications Commission Chairman Ajit Pai commented on the change, noting that more than 1,000 stations acquired FM translators in the past year alone.

“The stations benefitting from our initiative represent the diversity and localism found on the AM band. For example, FM translators went to a Shawnee, Oklahoma station owned by the Citizen Potawatomi Nation, as well as a student-run station at the University of Colorado.” 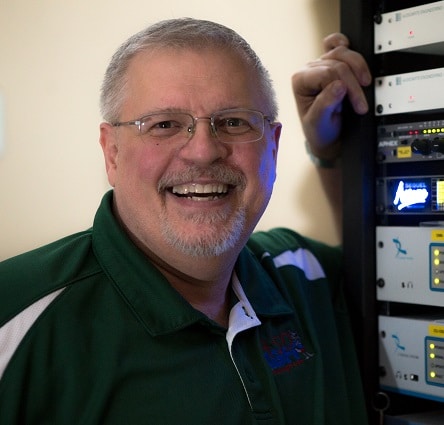 Chairman Pai elaborated on the significance of FM broadcasting for AM stations.

“The specifics of the rule change involve technical jargon that only broadcast engineers will probably understand,” he wrote. “But the real-world impact of this order is simple: It will now be easier for AM stations to find suitable location for their FM translators. And that, in turn, will make it easier for AM broadcasters to serve their local communities at night.”

KGFF General Manager Mike Askins was understandably proud of the mention, having spearheaded months of preparations to secure the FM band.

“This makes me incredibly proud of what we’ve accomplished,” he said. “The FM project has made a difference in our listenership and I’m hoping this is only the beginning of bigger and better things for KGFF and local radio.”

Askins, who has been a DJ since the 1970s, worked through an often arduous and meticulous process to expand KGFF to the FM band. Since coming on air before the Great Depression, KGFF had been strictly an AM station. When Citizen Potawatomi Nation purchased the station 1998, it was done in part to support local radio for Pottawatomie County communities. Adding an FM signal was always part of the plan Askins noted, but it certainly wasn’t an easy task.

In comments made right after the September 2016 switchover, Askins explained the process he’d just been through since December 2015.

“KGFF had to find an existing FM translator licensed within 250 miles of our broadcast site,” he explained. “Once we found a viable license, we had to purchase it from the previous owner; get FCC approval and hire FCC approved engineering services to calculate what frequencies might be available in our specific location.”

Station staff, a contract engineer and an attorney with years of Federal Communications Commission experience then sought at a translator for sale in the range of the new station, a tower site and a frequency that met FCC requirements.

Rain or shine, day or night, listeners for local news and programming can tune in to KGFF. The station’s emphasis on locally-focused broadcasts, including community news and radio broadcasts of Shawnee High School and Oklahoma Baptist University Athletics, remains KGFF’s concentration. In addition to broadcasting at 100.9 FM and 1450 AM, KGFF is also streaming local sports as well as The Mike in the Morning Show on weekdays from 7-9 a.m. and The Daily Stir at 12:45 p.m. on www.kgff.com.