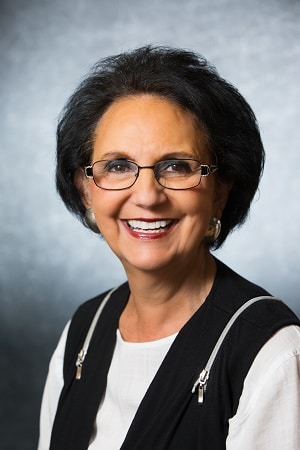 Tribal Vice-Chairman Linda Capps has been recognized in many fashions while serving others as a school teacher, adult education instructor, businesswoman, and as the representative of the Citizen Potawatomi Nation’s second highest executive office. The vice-chairman was recognized in February for how her outstanding public service has benefitted Oklahoma women and families as she was named as one of two recipients of the 2017 Kate Barnard Awards.

“Needless to say I was very surprised to learn I was being honored for such a meaningful award,” said Vice-Chairman Capps. “I’m thankful for the commission and their work, and I’m very pleased to have even been considered.”

The Kate Barnard Awards have been given by the Oklahoma Commission on the Status of Women annually since 1998 to honor outstanding women in public service whose leadership has benefitted Oklahoma women and families. Nominees are from the ranks of elected or appointed salaried public officials in Oklahoma.

In 1907, Kate Barnard, a native of Oklahoma, became the first woman to win a statewide elected office in the United States as Commissioner of Charities and Corrections. She was a key figure in the enactment of a compulsory education law providing for state payments to widows dependent on their children’s earnings, of legislation implementing the constitutional ban on child labor and of laws aimed at unsafe working conditions. Alongside the vice-chairman, Oklahoma County Commissioner for District 1, Willa Johnson, was also recognized for her service in multiple national and statewide organizations. From 1976-1984, Capps worked as a high school business teacher and Indian Education director at Dover Public Schools and Tecumseh Public Schools respectively. From 1987-1997 she served as a government-contracting specialist with the Oklahoma Bid Assistance Program before joining Gordon Cooper Technology Center as an adult education instructor.

Since 1998 she has worked full time at the Citizen Potawatomi Nation in conjunction with her duties as vice-chairman, having been an elected official at the Nation since 1987.

Vice-Chairman Capps has served on the board for Rural Enterprises, Inc. of Durant, Oklahoma, The Foundation Board for Seminole State College, Gordon Cooper Technology Center Foundation and the Federal Reserve Bank of Kansas City Community Development Advisory Council. She has been active in community and civic organizations in the Tecumseh and Shawnee area for years and is a current member of the Board of Directors of First National Bank & Trust of Shawnee.

She is also a past Tecumseh, Oklahoma Citizen of the Year, a member of the Gordon Cooper Technology Center Hall of Fame, 2016 AARP Oklahoma Indian Elders awardee and 2016 Gordon Richards, Sr. Public Service Award winner. However, she said the 1997 Small Business Administration’s Oklahoma Minority Advocate of the Year award is her most prized honor.