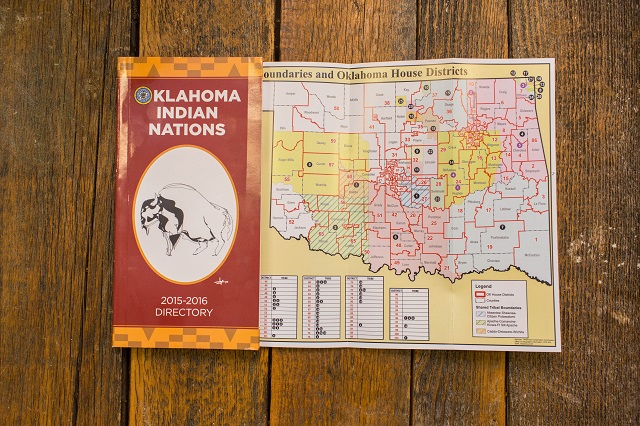 The Citizen Potawatomi Community Development Corporation has a number of missions. Whether its staff is promoting small business development in Indian Country, financing community infrastructure development in rural Oklahoma or providing credit and financial management counseling to those in need, the organization takes on a wide array of challenges.

One such mission is now in its third installment, as the 2017 Oklahoma Indian Nations directory is now on sale.

The 2017 Oklahoma Indian Nation’s Directory contains information on all 38 of the state’s tribal leaders, jurisdictions, contact numbers and websites. There is a foldout state map indicating each tribal government’s jurisdiction as well as contact information for Oklahoma’s U.S. Congressional delegation, Oklahoma state legislators, members of the U.S. Senate Committee on Indian Affairs, officials from the Bureau of Indian Affairs, First Nations Development Institute and other groups relevant to tribes and their members.

The booklet was originally conceived by CPCDC Director Shane Jett as a replacement of a similar directory once produced by the State of Oklahoma’s now defunct Oklahoma Indian Affairs Commission. From 1967-2011, the Oklahoma Indian Affairs Commission, as part of its mission to facilitate dialogue between the state government and tribal governments, compiled up to date information on the state’s tribes, their leaders and jurisdictions.

“We decided to produce our own because I remembered what a tool it was for my work in the legislature,” said Jett, who served as the Oklahoma House District 27 legislator from 2004-10. “If there is legislation or issues impacting tribes and you want their input or expertise, then all you need is this book to know who to speak to.”

The directories are available through the Citizen Potawatomi Nation’s Community Development Corporation for seven dollars, and can be ordered by visiting giftshop.potawatomi.org or by calling 405-878-4697. Each of Oklahoma’s state and national legislative offices have been sent one, free of charge, in hopes of facilitating a better dialogue between the state’s elected representatives and tribal governments.