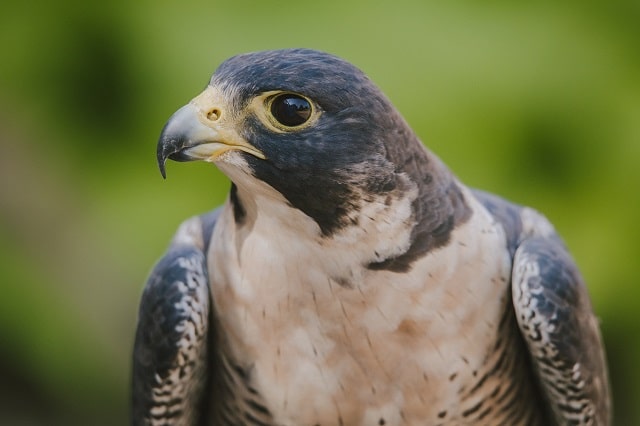 The thunder is talking at the CPN Eagle Aviary, which is now home to a peregrine falcon. Thomo Yake which means “thunder” in Comanche, is an adult, female peregrine falcon, a species that is the fastest bird in the world and can fly more than 200 miles per hour. She has a wonderfully loud voice, hence her name which is directly translated as “Heaven is talking.”

“All of the kids in school know about the falcon and specifically the peregrine because it’s the fastest bird on the planet,” CPN Eagle Aviary Manager Jennifer Randell said. “It never fails. Kids think the eagles are really cool but they always ask if we have a peregrine. It’s something the kids learn about in science class.”

Thomo Yake came from Sia: The Comanche Nation Ethno-Ornithological Initiative, where Randell and Aviary Assistant Manager Bree Dunham spent most of their time training. She was one of the first birds they worked with when they got to Sia in 2008. She is a fully flighted adult and the staff would like to get her to the point where they can call her to the glove and do indoor flight presentations.

Thomo Yake was bred to be an education bird, so she has never lived in the wild. She spent much of her life being glove trained and traveling to educational and conservational opportunities around the country with trainers at Sia.

“It’s nice to have a smaller bird of prey for people to see,” Dunham said. “One thing we have learned is that people are afraid of birds. You go into a classroom setting and the golden eagle scares some of the kids because it’s so large. The peregrine is vocal and a little more keyed up. That’s just how she’s wired.”

The falcon’s speed is what sets her apart from other birds of prey. Thomo Yake doesn’t do anything slowly.

“When we feed her, she catches food mid-air. She also out-thinks us,” Randell said. “By the time I have one thought, she is already ten steps ahead of me.”

As the weather begins to cool off, aviary employees will begin glove-training birds more often. When the temperature exceeds 80 degrees it is best not to train birds on the glove because it’s stressful for them to learn new things and may cause them to overheat. The aviary staff does not think it will take long for Thomo Yake to be comfortable enough to do public educational presentations again, since she has been trained for most of her life.

Randell and Dunham talk about the importance of culture and conservation when they take birds for presentations. They deem it important to talk to young people about how to treat these beautiful creatures.

For more information about the aviary, please visit www.potawatomiheritage.org/#aviary.