Iron Horse Industrial Park is on the rails 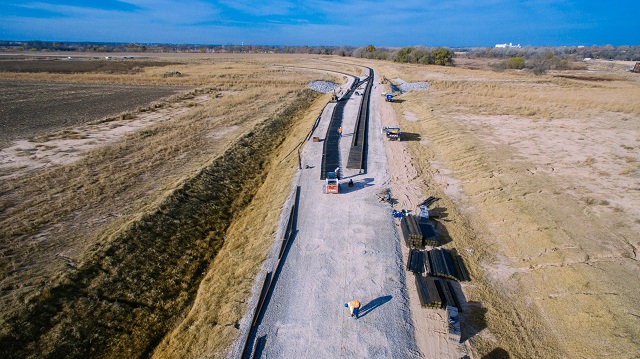 Long laid plans for Iron Horse Industrial Park are finally coming to fruition for the CPN Planning and Economic Development Department. Under the direction of Director James C. Collard, Ph.D., crews began laying the first of 5,700 feet of rail lines inside the industrial park in November and December. Completion is expected in January, weather permitting.

“This is a very important time for the Nation and for Iron Horse,” stated Collard. “It’s really impressive seeing something we’d had drawn up in blue prints and maps be built from the ground up. With the rail lines, we are actively seeking tenants for the industrial park.”

Along with the internal rail lines, work crews are in the initial stages of constructing a transload facility, which will allow for the quick and simple transfer of products from truck to rail, and vice versa, for shipping out of the park.

“This will be the first business at Iron Horse,” Collard explained. “It will serve in an important location in east central Oklahoma. It will additionally serve as a profit center for the Citizen Potawatomi Nation.”

Iron Horse is a general-use industrial park located on the national rail network of the United States. Its central location on 400 acres of Native American trust land just 35 minutes southeast of Oklahoma City and direct connections to the Union Pacific Rail Road provides great potential for importers and exporters alike. The agreement to put track throughout the park was signed off at the end of 2015.Through the use of the federal HEARTH Act and the park’s designation as a foreign-trade zone satellite site, Iron Horse has the potential to become one of the drivers of economic development and jobs in Pottawatomie County in the coming years.

The park will stand out compared to many other industrial parks in the region due to its rail connections. In the ten county area surrounding Citizen Potawatomi Nation, there are few industrial parks that have rail hook ups with available sites.

“The two most important and unique benefits of locating within Iron Horse are the foreign trade-zone and the rail service,” Collard said. “Rail is significantly less expensive for transporting heavy materials long distances. Rail service therefore adds significantly to the attractiveness of the park and is a major part of our marketing because, among other reasons, rail provides a direct connection to the ocean ports on the gulf, east and west coasts.”

Utilities at the park for potential clients will be developed on a case-by-case basis while building and infrastructure construction will be to international standards.

“We will be able to provide any amount of electricity needs to the businesses here at Iron Horse. Water and wastewater treatment will be handled on a case-by-case basis,” he said.