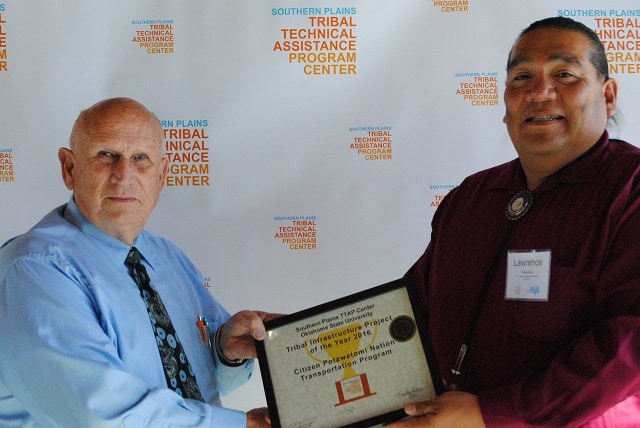 With overlapping county, federal and municipal road projects, the Citizen Potawatomi Nation’s Roads Department plays an important role in supplementing travel infrastructure in large parts of Pottawatomie County. One of the department’s recently completed projects, a long-sought sidewalk from the North Canadian River running south along Gordon Cooper Drive into the heart of the tribe’s FireLake complex was recently named the Tribal Infrastructure Project of the Year.

“Anyone who has driven that stretch of road knows how busy it is both in terms of foot and automobile traffic. There has even been a pedestrian fatality in that area,” explained Arthur Muller, director of the tribal roads department. “We were able to use safety funds to build a sidewalk that runs from the James A. Allen Bridge to Hardesty Road.”

Tribal road and travel infrastructure programs play a vital role in rural Oklahoma where state and local funds fall short of those collected in more populous metropolitan areas of the state. Federal funds specifically designated for tribes to be used in their jurisdictions fill an important gap in funding in this regard. The sidewalk project along Gordon Cooper Drive totaled $263,045.

In 2015 alone, CPN brought more than $3 million into the community for road and transportation infrastructure.

“This is a road that many of our tribal employees and members travel, but it’s also a vital travel corridor to all of our neighbors travelling between the two biggest cities in the county,” said CPN Vice-Chairman Linda Capps. “For years we’ve seen people walk through mud or on the shoulder of the street, so we’re glad CPN can provide a safe, dry area for them to get where they need to go. Our roads department does fantastic work on many transportation projects in the county, and this award is proof of that.”

Capps continued, “We are fortunate to have Art and his Assistant Director Shawn Howard at the helm of our roads and environmental departments. These two departments work together to compliment the outcome on projects like the new sidewalk.”

“The committee chose the Citizen Potawatomi Nation for the Infrastructure Project of the Year because of their proactive approach toward pedestrian safety and their concern for the community members who walk on this busy exchange. As CPN continues to expand their facilities, safe passage for tribal members has become a priority for the tribe. Walkable pathways not only promote safety, but encourage healthy, vibrant communities,” noted Karla Sisco, program manager, Southern Plains TTAP Center.

Among the winners of the SPTTAP Safety Champion Awards were the Choctaw Nation for its tribal transit program and its injury prevention program. Several safety awards were also presented to individuals for their efforts in reducing transportation related injuries and fatalities, including Bonita Paddyaker of the Comanche Nation, Sarah Hayes of the Chickasaw Nation, Patrick Keahbone of the Anadarko Agency and Trooper Joe Williams of the Oklahoma Highway Patrol.