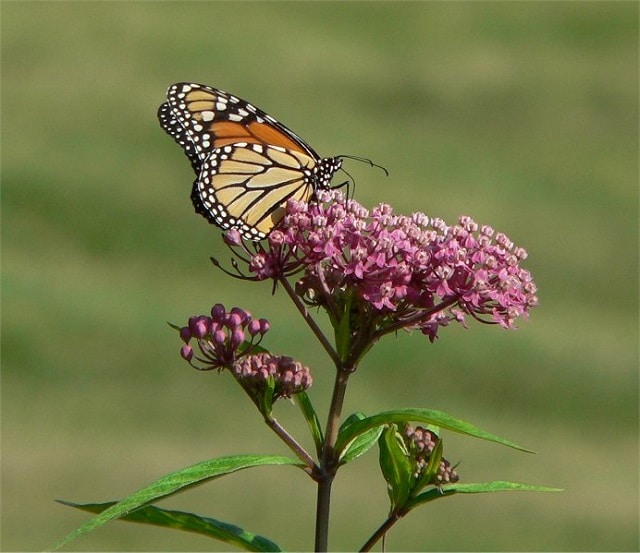 The Citizen Potawatomi Nation, along with the monarch habitat rebuilding initiatives, is working with six other Oklahoma-based Native American tribes, the Euchee Butterfly Farm and the University of Kansas’ Monarch Watch to help restore the monarch population. CPN members and employees have learned that milkweed is a very important plant to monarch butterflies. The plant, native to many areas in the tribe’s jurisdiction in Pottawatomie County, it is the only plant that monarch caterpillars can eat, so it is typically where they lay eggs.

Milkweed is abundant in the midwestern and northern states and was traditionally a special spring treat for Potawatomi people. During certain times of year, there are specific ways milkweed can be pruned to promote growth, such as cutting the tops off the plant. By doing this, the Potawatomi people have been assisting monarchs and milkweed growth for many years.

“I know almost every Potawatomi and Kickapoo in Kansas eats them. I’m pretty sure up into Wisconsin they do too,” Enedina Banks, CPN Language Department employee and a Prairie Band Potawatomi member, said of the milkweed plant. “They are a delicacy of sorts as they are picked at certain times of the year. In Kansas, where the Prairie Band Potawatomi live, nenwejek, or milkweed, is plentiful. Actually, as soon as you drive into Kansas from Oklahoma on the highway you see them everywhere; it’s pretty cool.”

Banks shared her family’s recipe for cooking nenwejek, which can be identified by velvet fuzz covering the entire plant and large leaves.

First, identify the milkweed by breaking a leaf or stalk and seeing if it exudes a large amount of white, milky fluid. You can also taste the plant to see if it is slightly sweet. If it is bitter, do not eat it.

Next, cut only the top four inches off of the plant prior to them blooming. There is about a two week window in early spring when these plants are ready for harvest.

Parboil the milkweed for one minute, discard the water and heat them in fresh water with pieces of bacon and dumplings on low until they are tender. To make the dumplings, put flour in a bowl with enough water to make little chunky dumplings and the extra flour will make the soup creamy.

Potawatomi people have always cared for the environment, so planting and eating the milkweed plant assists in the rebuilding of the monarch population and can connect tribal members to their Potawatomi culture.