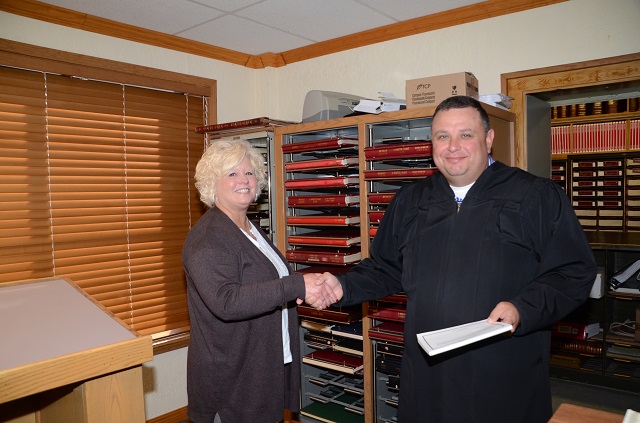 As home to the Chickasaw Nation’s Artesian Hotel, Murray County, Oklahoma has been held up as an example of positive relations between tribal nations and local governments that benefit rural Oklahoma communities. Following Election Day 2016, newly elected Murray County Clerk and Citizen Potawatomi tribal member Jill Jones Hall will be playing a leading role in furthering the county government’s role in serving its people.

Hall is a longtime employee of the county clerk’s office and decided to run following the death of her longtime boss and then-county clerk, David Thompson, in May 2015. Thompson had served 30 years in his position and his replacement was named by the county commissioners after his passing.

“The county commissioners appointed someone else and I thought I could do the job due to my long time working there,” Hall explained.

She initially joined the county clerk’s office under Thompson in 1990 and has been there ever since.

While Hall ran as a Republican, the Smith family descendent emphasized that partisanship wasn’t a main concern when it came to serving the people of the county.

“I have always set politics aside while working with elected officials so that all offices work together for the benefit of the residents of Murray County,” she noted.

Mirroring a trend in Oklahoma’s former “Little Dixie” Democrat heartland, the Sulphur Republican defeated Democrat Kevin Davenport by a vote total of 3,537 to 1,948. In a notice to the voters after the election, Hall wrote “It’s easy to see why Murray County is such a great place to live. We are a community of people who, regardless of our political beliefs, care about each other and the county as a whole.”