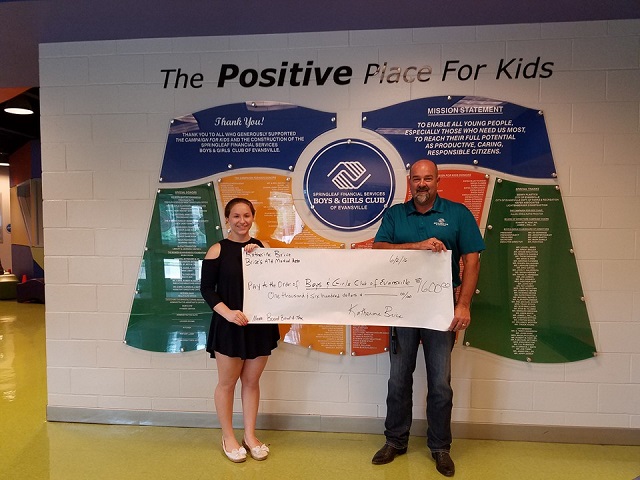 Fundraisers are a part of life for non-profit organizations, and the format for these vital funds are as varied as the organizations they serve. One CPN member from the Rhodd family, Katherine Brice of Evansville, Indiana, decided to take action using a unique fundraising skill for one of her hometown’s local charities using the tools she had at hand.

Brice, a third-degree black belt and taekwondo instructor, learned about the important role the Evansville Boys and Girls Club has in serving at-risk youth there. The organization was in danger of a funding shortfall, and Brice decided to use her martial arts skills to help support their work

“My mom told me that the Boys and Girls Club funding was cut by the government. This made me interested and I wanted to find a way to help,” said Brice.

Called a “break-a-thon,” local martial artists and students set a goal of how many boards they would break and then request a donation from supporters and sponsors to match the numbers broken.

Younger students were able to participate by kicking or punching through pre-cut boards, allowing them to enhance their technique, have fun and raise funds for a good cause all at the same time.

“They come in smiling, so proud, and they’re like, yay, I get to break boards,” Brice told a local news channel who came to film the event.

“And they probably don’t realize that what they’re doing is actually going for a really good cause. They’re just happy to get out here, break boards. And when they’re here they’re just loving it, and then at the same time, they’re helping someone else by having fun.”

Once the boards were broken, the funds were totaled and Brice and her fellow martial artists raised $1,600 for the Evansville Boys and Girls Club.

Brice said that though her initial goal was to raise $2,000, she was not disappointed with the results because it was the first year to host the fundraiser. She said that she hoped the break-a-thon would become an annual event for the Boys and Girls Club, helping support their unceasing efforts to serve Evansville’s at-risk youth. This coming year she plans on planning it and a separate break-a-thon for another local non-profit organization.