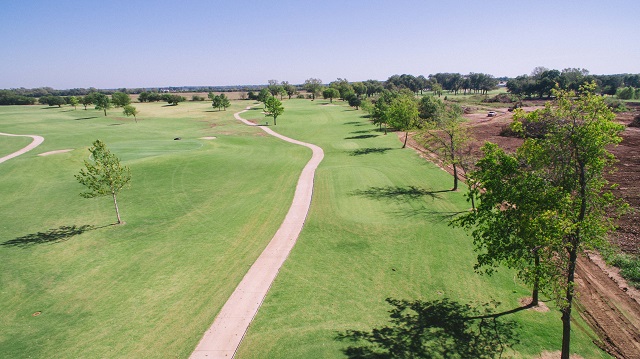 The extremely mild fall, almost a continuation of late summer temperatures into November, have given the renovation of FireLake Golf Course a boost.

“We’ve been done with construction for a few months,” said FireLake Golf Course Director Chris Chesser. “From now on, we’re in ‘grow in’ mode, letting our sod and grass grow in before the temperatures drop too much. Unfortunately Bermuda’s growing season is pretty much done.”

The course, clubhouse and driving range have all had complete overhauls in the past year. The new clubhouse is open, complete with a working pro-shop. It has even opened its two event spaces for holiday parties and other events. For those familiar with the driving range’s tendency to turn into a water hazard at the slightest hint of rain, the new, undulating target greens on top of embankments are a stark change.

Sprigging, or seeding of Bermuda, continues around the course and on the new putting and chipping practice greens.

Much of the course’s design upgrades were drawn up by an architect, and were then implemented by the work crews from United Golf LLC. Mike Webb, owner of United Golf LLC, said the crews paid special attention to getting the course’s drainage situation fixed. The golf course, like much of the surrounding FireLake complex, sits in a flood plain and had a tendency to have standing water after strong rains.

Webb’s 20-person work crew developed the course’s new layout after it was plotted on a 3D map, giving United Golf workers a more realistic view of how their labors should develop. The construction phase, initially slated to only be nine holes, ended up taking eight months after it was decided to put the front nine under renovation.

Webb also credited course Superintendent Derron Day for the progress made during the construction phase.

“Right now our staff is doing normal maintenance, from trimming trees, cleaning the creek and cutting the Bermuda grass that we allowed to grow over our new cart paths,” said Chesser. “Our superintendent, Derron Day, decided to let that Bermuda grow over the cart paths during the hot weather, and then we collect the sprigs we cut and put them down on spots of the course that are bare and still in need of growing.”

One of the more significant changes is hole number 12, where the trees and foliage that sat directly south of the tee box have been completely cut back.

“Our maintenance department cut that back to allow the back nine holes to receive more air flow. This should help with our growing and hole maintenance on holes 12-15.”

The course will also have one timely addition when golfers tee off in 2017; a new clock donated by the Grand Casino Hotel Resort. Chesser said that, weather permitting, the back nine holes may be ready to play by CPN’s annual Family Reunion Festival in June 2017. The front nine, whose renovation began a few months after the back nine, should be open in late summer.

“It’s been a long process, and we know we have a lot of people asking about re-opening. We want to get it right the first time, have good grass down and a playable course from the get go. Until then, we encourage those wanting to see some of the progress to visit our proshop and new clubhouse.”