More than 32,000 Citizen Potawatomi live in countries around the world, each leaving their own unique footprint. One such individual, Brandon Savory, is nearing his second year in such a journey as he sails around the world with two friends and a “cat sized dog” on a vessel named Cool Change. The Hownikan caught up with Savory as he was nearing the Amazon River in South America to discuss where he’s from, where he’s been and why he decided to pursue this journey.

Tell us a bit about yourself in terms of where your hometown is and what you did before hopping on the Cool Change.

“I am a 32-year old Oklahoma boy born in OKC, but just months after my birth, my mother, father, sister and I took to the road. We moved to the Pacific Northwest, then the Smokey Mountains of Tennessee and beyond. My mother and father went their own ways in my early years. Mom kept to her drifting ways, moving from town to town and my dad settled deep in woods of Missouri on a 2,000 acre plot of wooded land. This was where I learned to live in the arms of Mother Nature and my father showed me the ways of his Potawatomi spirit. We spent years on end roaming the hills, hunting, trapping and fishing. I wasn’t sure how these skills would become relevant to my life but knew I felt free as a bird in that timber.

“When I was 16, I took the opportunity to try my hand in Hollywood, packed my bag and headed west on a Greyhound bus to Studio City, California. I dreamed of the silver screen. In my down time from auditions and acting classes I fell in love with photography. My focus shifted from being in front of the camera to the magic made behind the lens. I was completely head over heels in love with filmmaking.

“College wasn’t really for me. In my mind I believed that I could learn more just by making films with my team rather than sitting in a class room learning from a professor. We hit the ground running making motorcycle films in 2002 and traveled the world for eight years with our passion for filmmaking guiding the way. It was bliss and I thought this was it for me.

“As we all know, nothing is forever and our band of brothers all went our own ways and the saga came to an end when I was 25. At this time my sister had begun breaking into the production of commercials in Hollywood. When I was ready to branch out of my motorcycle world she welcomed me into the commercial world there in Los Angeles as a camera operator. It quickly consumed my life, I loved it.

“Living in California I spent countless days in the ocean and soon developed a love affair with the sea and the wanderlust experiences she gives. It reconnected me with Mother Nature and rekindled the fire that lit my life up when I was a kid in the timber. My free time now was being spent in the cool waters of the Pacific spearfishing, surfing and just exploring the sea floor by diving. I would stand at the shore’s edge and look out to that endless blue horizon just wondering. I again felt an overwhelming force that beckoned me further. It came in the form of an allwhite sloop on the horizon. I always looked at the early sailors as the original adventurers. So there was only one thing left to do.”

Did you have training on a sail boat before this?

“I bought my first sailboat in February of 2009 and spent the next seven years sailing the coast of southern California with my dog, lovely girlfriend and my water loving mates. I spent those years learning the craft from a 75-year old man named Captain Bob. He has taught me almost everything he has learned from his 50 years of crossing oceans in sailing vessels. He’s my mentor in many aspects of life now.”

What makes a guy decide to hop on a 44-foot sloop with two other friends and a cat-sized dog?

“A hunger for life and liberty. In January 2015, I stepped foot on a 1984, 44-foot cutter rig sloop in Fort Lauderdale, Florida named Cool Change. She was perfect for the voyage that lay ahead but was way out of my budget at the time. The owner Gary and I sat around the boat for three hours as I listened to his stories of the places he’s seen with his old sailboat. I was in love with her.

“I flew back to California and before I knew it, a year and a half had passed since I looked at Cool Change. I would send an email to Gary every couple months letting him know that I had been dreaming of sailing his boat around the world and I was saving my pennies. For that year and a half I just lost myself in work and day dreamed constantly of setting my sails and pointing somewhere wild. I returned one day after a job abroad and realized I might have done it. When I got in contact with Gary regarding his vessel he said ‘Yes, I’ve been waiting for you, but you better hurry because the boat show is next week and if you are not going to buy her then I will surely sell it there.’

“I took a red eye flight to Fort Lauderdale and by 9 a.m. I was standing at the dock gazing in awe at CC’s massive rig again. I saw a grin on her face in that early morning light. When he handed the key to me that day his eyes were filled with joy and sadness all at once. I knew now I had not just bought a boat but I also had been initiated into a very rare and mysterious club of mariners. I now had an obligation to myself, captain Gar and a sweet little girl named Cool Change to embark on the voyage of a lifetime.” 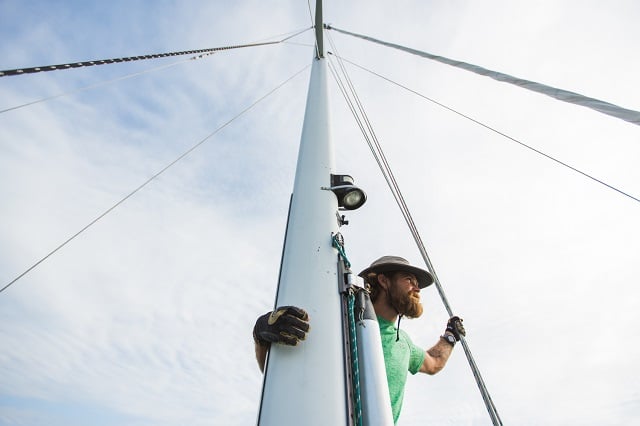 How can three young guys afford a trip like this?

“I slept on the boat the night I bought it and my mind raced with the thoughts of all the places and experiences Cool Change and I would have together in the years to come. I woke up the next morning knowing that there was a huge shift happening in my life, so I set off for the next several months with a sharper focus and a real drive for embarkment. I flew back to the west coast and started selling, packing and diminishing my life as I knew it. My entire world changed in a matter of months. The car, the motorcycles, the girlfriend, the household and all the clutter that we called ‘life’ all vanished. I was now a man with no ties and a footloose feeling of something pushing me onward in that magnetic direct. The one thing from my old life that I wasn’t going to just chalk up was my best mate Peanut. At this time he was only a year and change, but was a born sailor.

“With me throughout the seven years of dreaming this adventure was my mate Scott. He loved sailing with the same fire as me. My next call was to a friend through filmmaking, Andrew Tomayko. We had worked together in Russia and Australia a few years back and had the same drive and passion for adventure filmmaking. Andrew is one of the most talented filmmakers I have ever had the pleasure to work with.

“We spent the next eight months living and working on Cool Change day and night to outfit her for this voyage. I would leave for work somewhere strange for a couple weeks and return to my boys working away to get the ship ready for a December push off, just after the hurricane season. December came and went; we knew it was ‘now or never!’

“On New Year’s Eve 2015 we finally untied our lines from that Fort Lauderdale dock. This elusive dream has now materialized right in front of our eyes due to all of our blood sweat and tears. Not one dollar was given to us to achieve this goal. It all came through hard work and saving our pennies, but without the kind hearts and guidance from all the amazing people in our lives we would still be tied to that dock.

“It’s not about how much money you have in your pocket but more about the amount of passion you have for something in life. I believe if you work hard enough and stay focused on what you want your life to be, then so it will be. Dream till that dream comes true and you will find yourself standing right where you have always dreamed of.”

We heard you had some trouble with real life pirates?

“I now see pirates as people just stuck in between a rock and a hard place. They are usually just the extremely poor and desperate people of each region. To be frank, ‘pirates’ exist in every village around the planet; the only difference is that out here on the sea they have boats.

“I just treat the dangerous places we sail like I would a dangerous forest; stay alert and aware, never put your guard down and sleep with one eye open. But really you can be the most prepared man but you still have to sleep sometime.

“When we were sailing up the Rio Dulce in Guatemala, we woke around midnight to the dog barking like crazy. Andrew and I jumped up to see what the commotion was all about. Our skiff (a small vessel with a 15-horse power outboard motor) was slowly floating away into the darkness. To the left of it was a dugout canoe paddling away. We retrieved the now motor-less skiff in the night, quietly pulled anchor and left. All in all, the poor fishermen got a $3,000 motor, but no one was hurt. The same thing can happen in your back yard back in the states though.” 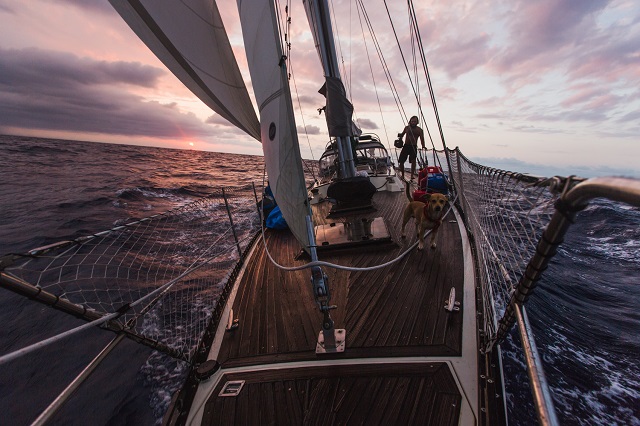 Is there some aspect you’ve experienced in your trip thus far that has really stood out?

“The aspect of this voyage that stands out as unforeseen would have to be all of the fears and doubt you can have about a place before you go. Once you throw all of that into the wind, you find treasures and beauty that were hidden and unattainable with your old views. The greatest thing that this journey has taught me about myself is to just go see for yourself and make your own judgments through experience. You will find your bliss in those moments.”

If you would like to follow the trip of Brandon Savory and his crew on the Cool Change, visit SeaChangeLog.com.