The Citizen Potawatomi Nation Tribal Court system is designed to provide enforcement of tribal laws, equal justice to all and protection of tribal sovereignty. The court initially functioned as the Court of Indian Offences for western Oklahoma beginning in 1978 and became the CPN Tribal Court in 1985. Its caseload has expanded consistently each year to meet the needs of tribal members, tribal employees, other Native Americans and non-Indian litigants.

The Citizen Potawatomi Nation Tribal Court is comprised of a three district court judges, seven supreme court justices and two prosecutors. All judges and justices are law trained and are recognized as accomplished, well qualified and experienced individuals.

In the summer of 2016, the CPN Supreme Court marked a new milestone. For the first time ever, all sitting justices were members of the Citizen Potawatomi Nation. The Hownikan spoke to each justice about their background and motivation in joining thetribe’s highest judicial office. Their responses have been lightly edited for clarity. 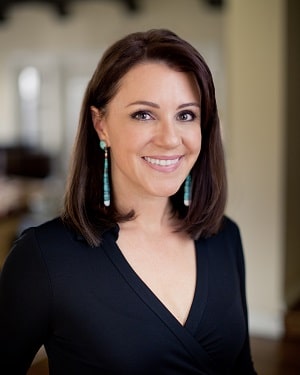 Where are you originally from?
“I grew up on a farm near Saddle Mountain, Oklahoma and went to school in Mountain View.”

What is your current position and what kind of law practice do you specialize in?
“I am a professor of law at UCLA School of Law and director of the Native Nations Law and Policy Center (also at UCLA). I specialize in American Indian Law and international indigenous peoples’ rights.”

Why did you go into the legal profession?
“I went in specifically to do Indian Law and human rights.”

What motivated you to accept a nomination as a justice on the CPN Supreme Court?
“I have enormous respect for Chairman Barrett, Vice-Chairman Capps and all others who have dedicated so many years to government service for CPN. I see serving on the court as the highest possible honor, but also as a small way in which I can give back to our Nation. It is a privilege and a pleasure.” 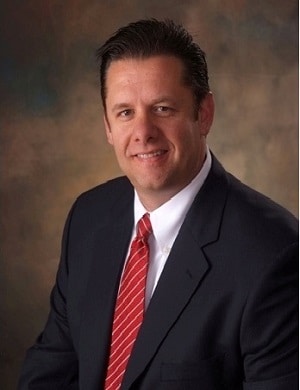 Education: Bachelor’s Degree in Business Administration, University of Oklahoma, 1989. Juris Doctor from the University of Tulsa, 1992.

Where are you originally from?
“I was born in Norman, Oklahoma but grew up in OKC.”

What is your current position and what kind of law practice do you specialize in?
“I am a founding partner of Coffey, Senger & McDaniel, PPLC. Our firm primarily represents companies that have been sued in state or federal court. We represent product manufacturers, trucking companies and any type of business interest. Our firm also offers services in wills, estates and trusts; real estate; employment law.”

Why did you go into the legal profession?
“The legal profession provides many opportunities to help people who cannot help themselves. It does not matter who calls the office, they have a problem that they cannot correct alone. Whether the person is calling on their own behalf or on the part of a larger organization, the individual requires our assistance in solving whatever problem they are encountering. It gives me great pride to be a part of solving issues and seeking solutions.”

What motivated you to accept a nomination as a justice on the CPN Supreme Court?
“The motivation to accept the nomination to the CPN Supreme Court was grounded in giving back to my community. My family is from Shawnee, Oklahoma and I felt a strong desire to be a part of the court to help decide cases based on the law but also with an understanding of the history of the tribe. The future of the tribe is dependent upon the core structure of the government. The rule of law is an extremely important part of the structure and I believe that it is critical to have tribal members serving in this capacity.” 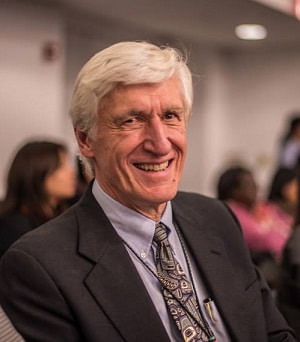 Where are you originally from?
“I grew up in Oklahoma, mostly outside of Norman. My father held on to the farm where he grew up near Wanette, in the southern part of Pottawatomie County. We spent a lot of time there, and we still own the place – a Potawatomi allotment. I was born in Rapid City, South Dakota, not far from my mother’s home. It was during World War II and Dad was due to ship overseas, so mom returned home for a short time.”

What is your current position and what kind of law practice do you specialize in?
“For almost 40 years, I have been the executive director of the Indian Law Resource Center, a not-for-profit Indian legal organization that I founded. The Indian Law Resource Center represents Indian tribes and nations throughout the Americas, without charge, in cases involving major issues of Indian sovereignty, human rights, treaty rights, land rights and related issues. We are involved in a broad range of issues and have handled many kinds of cases for tribes. We are known for our work in proposing and winning adoption of the United Nations Declaration on the Rights of Indigenous Peoples. We continue to work in the UN and in the Organization of American States to advocate for the rights of Indian and Alaska Native nations, tribes and peoples.”

Why did you go into the legal profession?
“I went into the legal profession because I believed it would be an effective way to help people in need, a way to help correct injustices against Indians and all kinds of people, and a way to bring about needed changes in the law affecting Indian tribes and others as well. I was right that legal training provided many skills that have proven helpful, and I have been fortunate to be able to work in the public interest and to contribute to the well-being and development of the Citizen Potawatomi Nation.”

Why did you become a justice on the CPN Supreme Court?
“I have been very pleased and honored to be nominated and to serve on the Citizen Potawatomi Nation Supreme Court. This has been one way for me to serve my Nation. I am very proud of what our Nation has achieved economically, socially, culturally, and politically. I could not wish for more than to play a small part in our government.” 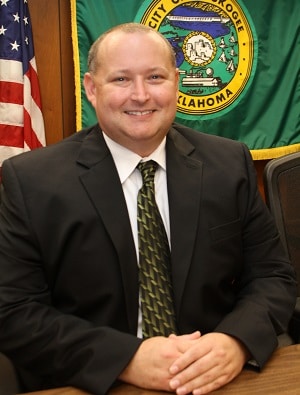 Education: Bachelor’s Degree from the University of Central Oklahoma, majoring in English with a minor in Political Science, 1998. University of Tulsa School of Law, 2003.

Where are you from? “Lexington, Oklahoma.”

What is your current position and what kind of law practice do you specialize in?
“Since January 1, 2016, I have served as the Interim City Manager of the City of Muskogee. On October 24, 2016, I will return to my regular position of city attorney for the City of Muskogee. As city attorney my job is akin to general counsel for a corporation, and as such is very diverse. My areas include municipal law, torts, employment law, public finance law and criminal law.”

Why did you go into the legal profession?
“I was always fascinated by the law and government, and felt it would be a very rewarding and challenging career.”

What motivated you to accept a nomination as a Supreme Court Justice at CPN?
“It’s wonderful to be able to give back to the tribe and to use my knowledge and skills to ensure that at the appellate
level cases are decided fairly, in a well-reasoned and sound manner in accordance with the CPN Constitution.” 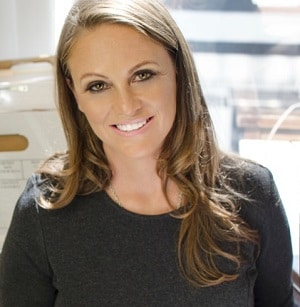 Where are you originally from?
“I am from Sarita, Kenedy County, Texas.”

What is your current position and what kind of law practice do you specialize in?
“Products liability on the plaintiff’s side.”

Why did you go into the legal profession?
“I wanted to pursue higher education and help others.”

What motivated you to accept a nomination as a justice on the CPN Supreme Court?
“It was an honor to have the opportunity to serve my tribe.” 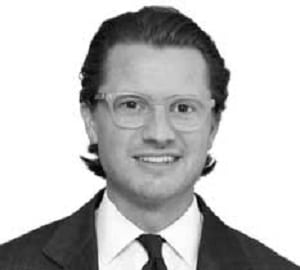 Where are you originally from? “Tulsa, Oklahoma.”

What is your current position and what kind of law practice do you specialize in?
“I am a director and preferred shareholder with my law firm, Barrow & Grimm, P.C. in Tulsa, Oklahoma. I focus my practice on business transactions and estate planning, including mergers and acquisitions, real estate, and financing transactions. I provide legal counsel to banks and companies of all sizes, from small business owners to large enterprises.”

Why did you go into the legal profession?
“I enjoy putting business deals together, and in my practice I provide legal counsel to clients entering into business ventures of all shapes and sizes. I get to develop lasting relationships with entrepreneurs and help small business owners realize their dream of starting a new business or expanding their business. Being at the center of these transactions that shape our communities is an exciting and rewarding experience.”

What motivated you to accept a nomination as a CPN Supreme Court justice?
“I was honored to be considered for nomination. Some years ago, I wrote Chairman Barrett to let him know he could call on me if the tribe ever needed anything. When presented with this chance to serve the tribe, I was all in.” 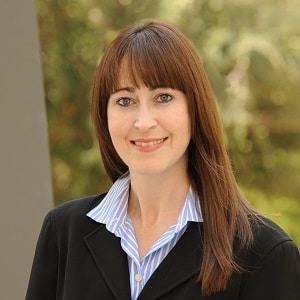 Where are you from originally?
“I was born in Shawnee, Oklahoma, and I attended my first years of school there. After Francis Tuttle Technology Center offered my mother a position teaching early childhood development in Oklahoma City, my family moved to Edmond. I entered Edmond schools after that move and graduated from Edmond North High School in 2000.”

What is your current position and what kind of law practice do you specialize in?
“I am currently an associate attorney at the law firm of Crowe & Dunlevy, P.C. in Oklahoma City, Oklahoma. As a business litigator, I handle all manner of litigation matters in federal, state, and tribal courts and alternative dispute resolution forums. I specialize in matters involving federal Indian law, tribal law, securities law, insurance law, and contracts.”

Why did you go into the legal profession?
“It may sound cliché, but I entered the legal profession, because I wanted to use my English degree to somehow make a difference. One of my best friends from high school talked me in to joining a pre-law fraternity with her while we studied at OSU together. I attended some of the fraternity programs, and the speakers sparked my interest in the law. I realized that legal work can bring about great change, and it still utilized the skills I developed while studying for my English degree. I was also drawn to the constant evolution of the law and the corresponding need for lawyers to continually study to stay abreast of its changes, making it always new. No area of the law exemplifies this constant development more than Indian law, and this makes the Indian law area of my practice the most dynamic and impactful part of my work.”

What motivated you to accept a nomination as a Supreme Court Justice on the CPN Supreme Court?
“I have always wanted to contribute more to the Nation. I am greatly honored by the nomination to sit on the Court, and I view this opportunity as a way for me to serve our Nation, just as all members must do in order for our communities to thrive. Migwetch to all who supported my nomination!”