William Polke’s November journey on the Trail of Death

In 1838, the Potawatomi Indians in the state of Indiana were forcibly removed from their ancestral homelands by order of the U.S. government. The 859 Potawatomi who started the journey travelled across Indiana, Illinois, Missouri and finally Kansas before finally arriving at their intended destination. The loss of life, 41 in total, resulted in the removal becoming known as the Potawatomi Trail of Death. Below are excerpts from a journal of one of the trail’s participants, William Polke. 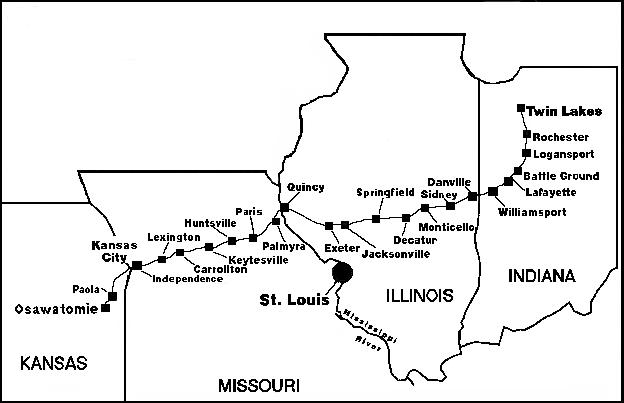 “At an early hour we left our encampment at Oak Grove, and travelled until two o’clock when we reached a settlement of Wea Indians on Bull creek, and camped adjoining Bulltown.

“Our journey was pleasant, and was marked by the anxiety of the Indians to push forward and see their friends. During the evening an attempt was made to enroll the Indians, but not very successfully. They did not seem (or would not) to understand or appreciate the object.

“Late in the evening several of the chiefs came to headquarters and requested to remain in camp tomorrow. But the journey being so nearly completed, and the scarcity of forage and provisions induced the conductor to deny their request, and insist upon travelling.”

“The day was consumed in making settlements with the officers. During the afternoon a considerable number of the Indians assembled at headquarters and expressed a desire to be heard in a speech.

“Pe-pish-kay rose and in substance said – ‘That they had now arrived at their journey’s end—that the government must now be satisfied. They had been taken from homes affording them plenty, and brought to a desert—a wilderness—and were now to be scattered and left as the husbandman scatters his seed. The Agent, Mr. Davis, they knew not, and his absence would not afford them an opportunity of deciding what they might expect from him. The Indians did not think such treatment of a character with that promised them in their treaties. They hoped Judge Polke, their friend, would remain with them and see that justice should be rendered’.

“Judge Polke informed them that considering their request too important to be disregarded, he would return from Independence, whither it was necessary he should go to attest the settlements of the emigration, and remain with them until Mr. Davis’s return. He would leave his son (Mr. B. C. Polke) who would in company with them visit and select such localities in the country as might please them. They returned for answer that they would reply in the morning. The Council then broke up.

“Quite an old man died after coming into camp last night. Beef and corn were delivered to the Indians in the afternoon. During the evening, a wagon belonging to and owned by Andrew Fuller, a Pottawattomie, containing six Indians, came into camp. They had travelled from Michigan with the intention of becoming citizens of the Western Territory, and borne their expenses for the whole route. They came without any instructions from the Agent at Logansport.”

“Travelled from Bulltown encampment to McLean’s Grove, a distance of twenty five miles. It had snowed the night previous and continued most of the day, which was very windy and excessively cold. But a small number of the teams kept in company—most of them selecting their own routes.”

“The settlements with the teamsters and officers were concluded today. Tomorrow we set out for home every thing having resulted as well and as happily as could have been anticipated by the most sanguine.

“I believe the foregoing journal to be correct in every thing pertaining to distances, localities, etc., etc.”