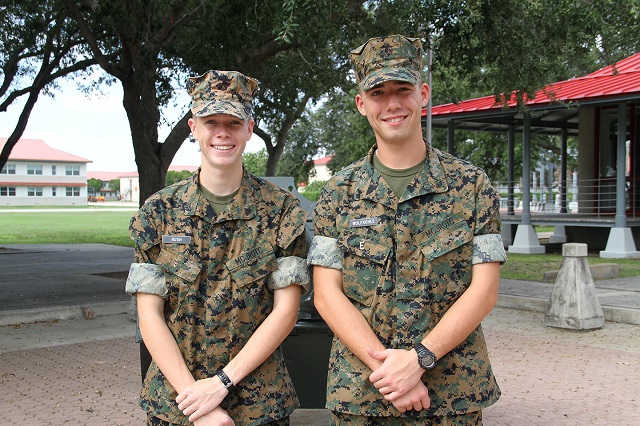 In history class, two Marine Military Academy cadets discovered they not only share Native American roots, but they actually belong to the same nation.

Juniors Cameron Rush of Bakersfield, California, and Anthony Wulfkuhle of Glendale, Arizona, met for the first time in August 2016 in their U.S. History class. It was during a lesson on Native Americans that the teenagers learned about their connection to the Citizen Potawatomi Nation in Shawnee, Oklahoma.

According to Wulfkuhle, their history teacher Randall Hill was telling the class how he was a Native American originally from Pottawatomie County in Oklahoma.

“I told my teacher: That’s the county of my tribe. I’m Potawatomi,” Wulfkuhle said. “Then Rush said, ‘I am, too!’”

Though no one doubted the boys, Rush and Wulfkuhle gladly proved their Potawatomi ancestry.

“A few days later, we both brought our Potawatomi IDs to class,” Rush said. “It was pretty cool.”

Rush is the son of Jennifer Betti of Bakersfield, Calif., and Brent Rush of Edmond, Okla. His Potawatomi lineage comes from his father’s side. He is a member of the Greemore family.

This is not the first time students at an academic institution found out about their shared lineage as Citizen Potawatomi. In May 2016, three Midshipmen from the 2016 graduating class of the U.S. Naval Academy, Jacque Kennedye, Caleb Anderson and Whitney Heer, discovered after sending in their individual graduation announcements to the tribal newspaper that the others were CPN members.

Marine Military Academy is a college-preparatory boarding school for young men in grades 8-12 with an optional post-graduate year. Since 1965, MMA is the only private school in the world based on the traditions and values of the U.S. Marine Corps. Located in Harlingen, Texas, MMA has been home to thousands of sons from across the world and is quarters to the historic Iwo Jima Monument. To learn more about MMA, visit MMA-TX.org.