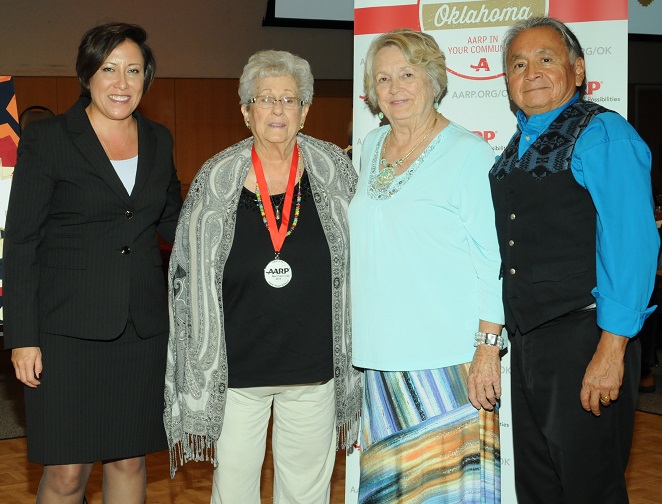 For many, the recognition of their work on behalf of their tribe or Native American issues comes later than it should have. Such is the case for one Citizen Potawatomi honored at the 2016 event, Shawnee, Oklahoma’s Beverly Hughes.

Beverly Hughes is a well-known elder in the Citizen Potawatomi Nation, whose work in the early 1970s played an integral part in the development of the tribe’s presence today. Elected in 1970 to what was then called the Citizen Band of Potawatomi Indians’ office of secretary-treasurer, Hughes’ primary work aside from serving on the tribe’s 5-person business committee was to gather contact information for tribal members’ in order to inform them of per-capita payments from the federal government.

To accomplish this, Hughes secured a $25,000 federal grant to fund the outreach effort. The result of this was the publishing of the very first edition of the Hownikan, the first tribal newspaper.

“All I was trying to do was give people an update on what we were doing and what services provided,” explained Hughes in a 2013 interview with the Hownikan. “It seemed pretty popular, so from then on we tried to produce it every quarter to keep our members informed.”

Today, the tribal paper has a print circulation of more than 15,000, reaching out to CPN members across the globe.

Hughes also played a vital role in developing the tribe’s first seal and codifying the correct spelling of the tribe with officials at the U.S. Bureau of Indian Affairs, who had erroneously spelled it “Pottawatomie” instead of the proper “Potawatomi.”

Hughes’ efforts on behalf of the tribe – many of which took place prior to the landmark 1975 Indian Self-Determination and Education Assistance Act – were integral in putting what became known as Citizen Potawatomi Nation onto the path of economic and cultural sustainability. If not for the dedication and work of elders like her, who fostered a sense of Potawatomi pride and community in the most challenging of times, the Nation would not be what it is today. Also honored was current CPN Vice-Chairman Linda Capps, also of Shawnee, Oklahoma. 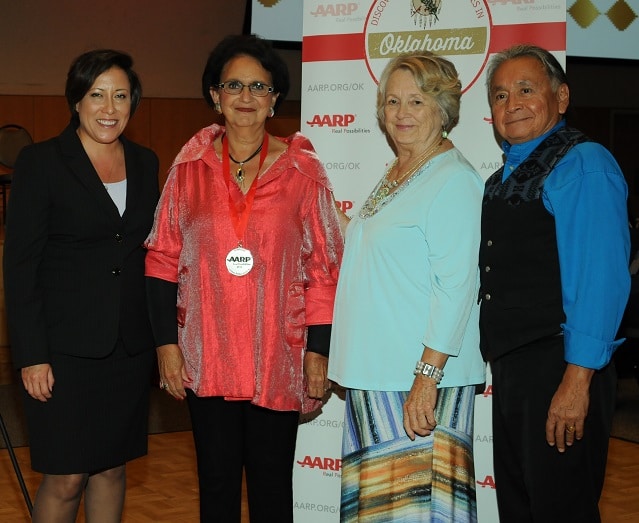 Vice-Chairman Capps’ impact is far-reaching into Indian Country due to her impact on the lives of countless students as a teacher and Indian Education Director at Tecumseh Public Schools. In addition to her educational experience, she has served as tribal vice-chairman since 1990.

During her tenure the tribe has increased its assets at an incredible pace and today is the largest employer in Pottawatomie County. She was honored also for her drive in search of new opportunities that will improve the quality of life for her people in the surrounding communities.

A testament to her dedication to the community came in March 2016 when she was honored with the prestigious Gordon Richard’s Sr. Service award by the Shawnee Chamber of Commerce for her more than decade-long commitment to the community.

Born in the community of Harrah, Oklahoma, Capps began her professional career as a business teacher at Dover Public Schools. In 1977, she moved to Tecumseh Public Schools, where for seven years she taught business and served as the district’s Indian education director. She also served for a decade at the Oklahoma Bid Assistance Program and as an adult education instructor at Gordon Cooper Technology Center in Shawnee, Oklahoma. She has served on the board of directors of numerous institutions, including the Federal Reserve Bank branch of Oklahoma City, Rural Enterprises of Oklahoma, Inc., Gordon Cooper Technology Center Foundation, the Foundation Board for Seminole State College and First National Bank and Trust Co., the largest tribally-owned bank in the United States.