William Polke’s journey on the Trail of Death

In 1838, the Potawatomi Indians in the state of Indiana were forcibly removed from their ancestral homelands by order of the U.S. government. The 859 Potawatomi who started the journey travelled across Indiana, Illinois, Missouri and finally Kansas before finally arriving at their intended destination. The loss of life, 41 in total, resulted in the removal becoming known as the Potawatomi Trail of Death. Below are excerpts from a journal of one of the trail’s participants, William Polke.

“We struck our tents at 8 this morning, and prepared for a march. Owing to the very great curiosity manifested by the citizens generally, Judge Polke, after being solicited, marched the emigration into the square, where we remained for fifteen or twenty minutes.

“Presents of tobacco and pipes in abundance were made by the citizens to the Indians, who appeared quite as much delighted with the favor shown them as with the excellent music of the band which escorted us around the square. We continued our journey, and at three o’clock reached our present encampment about sixteen miles from Jacksonville.

“The day was excessively warm and the dust very afflicting, added to which water was scarcely to be found on the route. Provisions and forage we find in considerable quantities, without difficulty.”

“Left Exeter encampment at a little before eight o’clock, and without any occurrence of note reached the Illinois River at about 11 – nine miles distant from last night’s camp. Preparations were made for ferrying the river, and we embarked in keel and flat boats directly after our arrival.

“The day was spent in crossing and re-crossing the stream, and by nine p.m. we succeeded in landing the last of the baggage wagons. We are now encamped on the opposite shore from Naples, where we shall perhaps remain to-morrow, to recruit the fatigues of the last few days. A child died directly after our arrival at the river.” 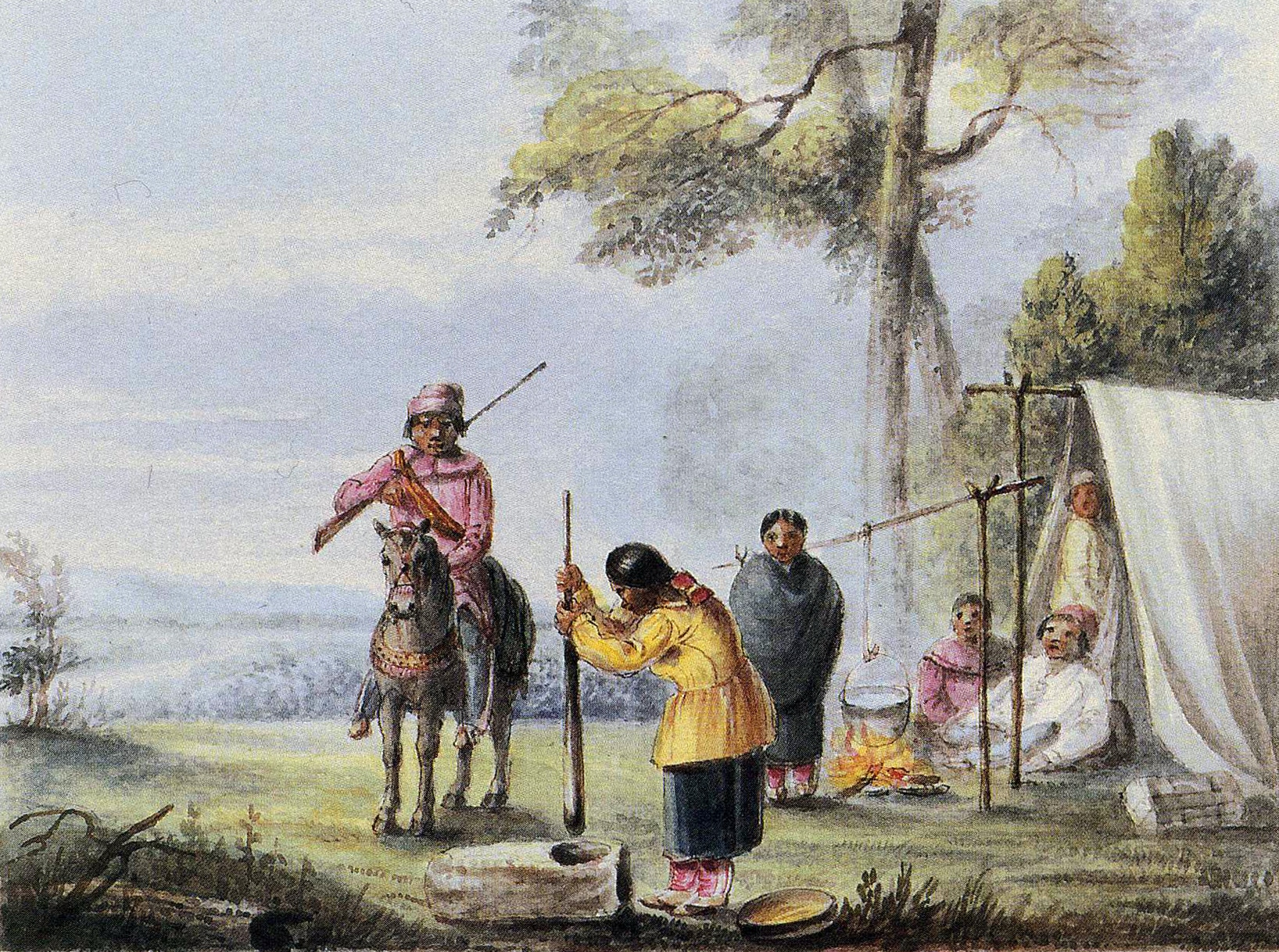 “The settlement of yesterday was concluded today, and every person engaged in the service, save the officers of the emigration, was paid up to the thirtieth. In order to allow the wagoners an opportunity of repairing their wagons, shoeing their horses and making other repairs necessary for the safe prosecution of the journey, much extra ferriage was done during the two days of our encampment at the river.

“This might have been avoided by remaining on the Quincy shore, but the dissolute habits of the Indians and their great proneness to intoxication, forbid such a step on the part of the agents of the government. At sunset all the wagons that had been repairing, were in camp, and we were prepared for next day’s journey.”

“Tomorrow being the Sabbath we shall remain in camp. The health of the Indians is almost completely restored. There are perhaps scarcely a dozen cases in camp.

“Subsistence beef and flour – of which the Indians are becoming tired. Bacon and pork cannot be procured. Forage hay and corn. Distance travelled today eleven miles.”

“At an early hour this morning we left our encampment, and passing through Keatsville (Keytesville), journeyed towards the Missouri River. At two o’clock p.m. we reached Grand River, preparations for the ferriage of which had before been made, and immediately commenced its crossing.

“By dark all the Indians and many of the wagons were over. The remainder will cross in the morning early and by 12 we hope to be able to continue our journey. Distance travelled today fifteen miles.”

“This morning before leaving camp a quantity of shoes were distributed among the indigent and barefooted Indians, the weather being too severe for marching without a covering to the feet.

“At eight o’clock we left Thomas’ encampment, and at 12 reached Carrollton, near which place we are now encamped. Distance 12 miles. Nothing occurred on the way. The cold was intense on the prairies.

“The country through which we passed today is very much excited. Nothing is heard—nothing is talked of but the Mormons and the difficulties between them and the citizens of upper Missouri. Carrollton is nightly guarded by its citizens.”