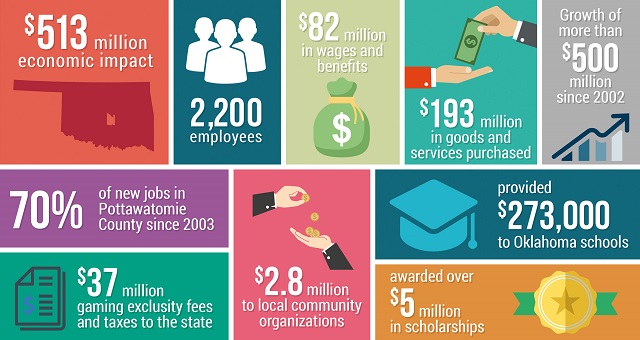 The Citizen Potawatomi Nation had a $513 million impact in Oklahoma during 2015. CPN directly supported 2,245 jobs and paid $82 million in wages and benefits. CPN indirectly supported thousands more jobs and boosted local economies by making purchases of more than $193 million on goods and services.

Tribal jobs are often a primary source of income and benefits for many Oklahoma families. According to a report by the Oklahoma Indian Gaming Association, tribal gaming in Oklahoma would rank as the nineteenth largest industry in terms of employers in the State of Oklahoma, with one in every 55 jobs directly related to tribal gaming. These employees spent $1.09 billion in Oklahoma derived from their employment earnings. In rural areas, that number is especially significant. For example, CPN alone has created 70 percent of new jobs in Pottawatomie County in the last decade.

In a recent report, Joseph Kalt, the Ford Foundation Professor (Emeritus) of International Political Economy at the John F. Kennedy School of Government at Harvard University, noted that Oklahoma is benefiting a great deal from having a wealthy neighbor. In addition to wages and purchases, CPN paid more than $37 million in gaming exclusivity fees and taxes directly to the State of Oklahoma.

Exclusivity fees received by the state government go to the Education Reform Revolving Fund, the General Revenue Fund and the Department of Mental Health and Substance Abuse Services. Of those funds, ODMHSAS receives about $250,000 per year, while 88 percent goes to the education fund and 12 percent goes to the general fund. The money derived from these revenues directly benefit of all of the state’s citizens.

Citizen Potawatomi Nation also remains committed to contributing to local civic and charitable organizations, gifting more than $2.8 million locally in 2015. CPN contributions to education included more than $273,000 to public education and more than $5 million in scholarships.