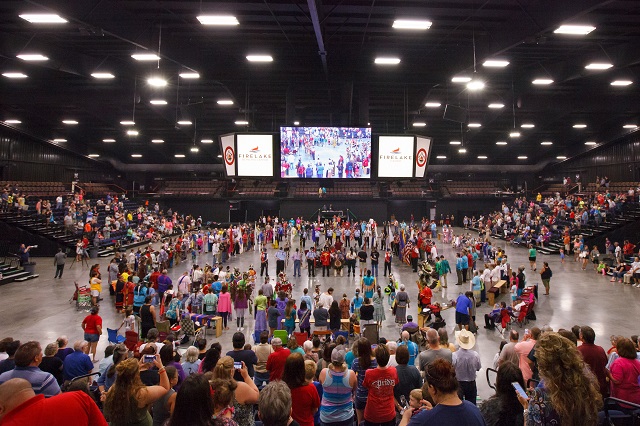 Despite searing July temperatures on the first official day of the 2016 Gathering of Potawatomi Nations, more than 2,000 tribal members and their invited guests from the nine Potawatomi tribes traveled to Shawnee, Oklahoma to celebrate the annual event.

For the eight tribes outside of Oklahoma, a “short” drive for members of the Prairie Band Potawatomi proved to be the easiest journey to Citizen Potawatomi Nation headquarters.

The distances traveled were:

At the annual Potawatomi Language Conference hosted by the CPN Cultural Heritage Center and the CPN Language Department, 300 speakers, teachers and students spent two days immersing themselves in the language of the Potawatomi people. This core of Potawatomi language professionals practiced teaching techniques, development strategies and spoke to one another in Potawatomi, displaying the dedication necessary to keep the language alive.

In a ceremony with fellow leaders of the eight other tribes in attendance, CPN Tribal Chairman John “Rocky” Barrett christened the road leading to the CPN Cultural Heritage Center as Neasano.

“It is said ‘one cannot tell where we are going without knowing where we have been,’” noted Chairman Barrett. “It was the incredible gift of this knowledge that Don Perrot gave us, and not without personal risk for himself… His advice in times of personal crisis as a Potawatomi elected leader was precious to me. I will be grateful all of my days. We will be grateful forever.”

After three full days of food, festivities and fostering closer Potawatomi ties, Chairman Barrett handed off the ceremonial eagle staff – held by the host of the Gathering the year prior to the event – to Chief Dan Miskokomon of the Walpole Island First Nation, hosts of the 2017 event.