CPN welcomes all for Potawatomi Gathering 2016

Each year, tribal members from across the country travel to the Citizen Potawatomi Nation’s tribal home near Shawnee, Oklahoma to celebrate the Family Reunion Festival.

The Festival, held annually during the last weekend in June, is a closed celebration, open only to CPN members and their immediate families. Its first incarnation occurred in 1999, when the old Citizen Potawatomi Intertribal Powwow was discontinued so only CPN members could take part in the cultural and sporting events. In a Hownikan column that same year, Chairman Barrett explained the reasoning behind the shift by explaining that the entire purpose was to build up cultural practices like dancing and drumming for tribal members.

While this CPN-focused event takes place each June, Potawatomi from around the country typically meet later in the summer for the Gathering of the Potawatomi Nations. This event, which rotates between each of the nine Potawatomi bands in the United States and Canada, is an opportunity for all Potawatomi to meet, share stories and traditions as well as practice their shared Nishnabek language.

This year’s Gathering of Potawatomi Nations takes place at the Citizen Potawatomi Nation, following on the heels of last year’s successful event hosting by the Forest County Potawatomi of Wisconsin. As with every year, the 2016 Gathering will include a language conference, cultural workshops, language classes, cultural classes and sporting events. The 2016 Gathering will take place in Shawnee, Oklahoma from July 28-30, 2016. Most events will take place inside the fully air conditioned FireLake Arena.

The tribal complex address is 1601 S. Gordon Cooper Drive, Shawnee, OK 74801 within a short walk of all activities during Gathering 2016. The closest major airport is Will Rogers World Airport in Oklahoma City. Shawnee is located approximately 35 miles east of Oklahoma City along Interstate 40. More information can be found online at gon.potawatomi.org. 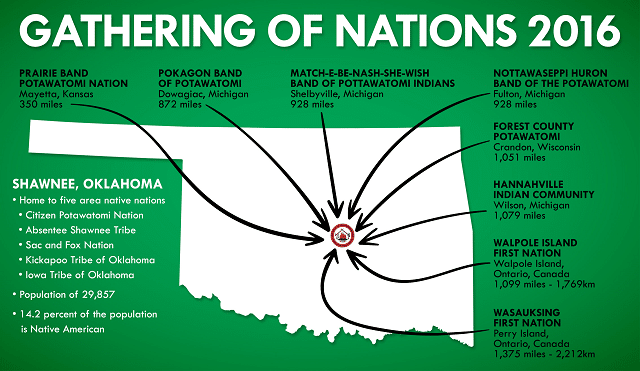