Update: On June 30, 2016 a judge granted Rural Water District 3’s motion to dismiss, but gave the State of Oklahoma 20 days to amend its petition.

The State of Oklahoma continues to try to disable the operations of Pottawatomie County Rural Water District 3. A recent lawsuit filed by State Attorney General Scott Pruitt claims RWD3 no longer exists despite an order from the Oklahoma Water Resources Board that expressly found that it does exist. Rural Water District 3 was formed by the Pottawatomie County Commission in 1997, and the legal existence of RWD3 was re-confirmed in 2008.

In response to the state’s lawsuit, Rural Water District 3 has filed its own suit in U.S. District Court in Oklahoma City, to stop the State of Oklahoma and its highway department from interfering with the district’s waterlines without cause or legal basis. 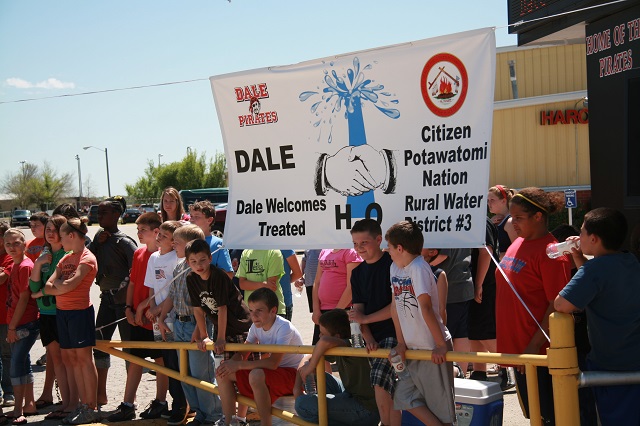 The state’s lawsuit came after Rural Water District 3 workers installed a 300 yard long pipeline along a state right of way, which is under the supervision of the Oklahoma Department of Transportation. The water line was essential to provide water service for businesses in the area. As a state-sanctioned agency, the water district does not need ODOT’s consent to use its rights of way. However, it is required to inform the state transportation department of planned work ahead of time, and comply with regulations regarding placement of the line. Despite Rural Water District 3 requesting ODOT to concur in the location of the water line, nearly two years ago, the state agency refused to agree, as required by state law, claiming that it was “uncertain” whether RWD3 exists. This uncertainty could have been cleared up in minutes if the state had spoken with the Pottawatomie County Commissioners who created District 3. With no response by May 2016, and no objection to the proposed location of the water line, District 3 workers began work to extend service to new business customers in Pottawatomie County.

ODOT has been agreeing with District 3’s water line locations for over a decade. There is no explanation for ODOT’s sudden refusal to cooperate. Contrary to state and federal law, the Oklahoma Department of Transportation is now jeopardizing the district’s operations, and threatening cut off more than 1,000 people from water service, along with five schools, many churches, police departments, fire departments and elder care facilities.

In its filings, the State of Oklahoma argues that District 3 does not meet the defi nition of an Oklahoma rural water district because it sold assets to the Citizen Potawatomi Nation in 2005. At the same time, the state also contends that the sale of assets to CPN was invalid, and therefore District 3 never sold any of its assets. The state’s conflicting positions are simply evidence of its bad faith. In 2005, as District 3 hovered on the brink of insolvency and was unable to pay its loans to the U.S. Department of Agriculture, its assets were legally purchased by the Citizen Potawatomi Nation. This purchase was approved by the Oklahoma Water Resources Board and Pottawatomie County Commissioners. Though the tribe held legal title to the pipes, pumping stations and other infrastructure, District 3 remained a state-sanctioned agency with its own board of directors, and continued to operate. Part of the CPN agreement in purchasing District 3’s assets stipulated that no profit could be realized, thereby providing affordable water to sections of rural Pottawatomie County that were without an adequate source of water.

The Oklahoma Water Resources Board – an arm of the Oklahoma government – also granted Citizen Potawatomi Nation the right to exercise certain managerial control over the district as did the Pottawatomie County Board of Commissioners. As a result of this approval, CPN has exercised oversight of operational issues such as water delivery, billing and infrastructure upgrades.

The attorney general’s office has filed the lawsuit attempting to invalidate the water district. This appears to be part of a larger trend of state-sanctioned legal pressure on CPN assets and enterprises to force the tribe to act as the state’s tax collector, a tactic recently deemed unlawful by a federal court.

Despite the April 2016 decision of Arbitrator Daniel J. Boudreau, which ordered state offi cials to cease attempts to collect state sales taxes at CPN enterprises, and the confirmation of this decision by Federal District Court Judge Robin J. Cauthron, the State of Oklahoma continues to ramp up expensive legal pressure on businesses and organizations affiliated with Citizen Potawatomi Nation.

In the past two years alone, representatives of the Oklahoma Tax Commission, Oklahoma Alcoholic Beverage Laws Enforcement Commission and Governor Mary Fallin’s former general counsel have used regulatory and legal actions as weapons against the CPN to try to force their unlawful sales tax scheme.

While the tribe currently oversees District 3’s operational and infrastructure costs at an annual financial loss, its service remains a priority for its more than 1,000 customers. Communities like Dale, Asher and Wanette are all served by District 3, while the City of Tecumseh receives a portion of its water needs from the rural water district.

In addition to the more than 1,000 homes receiving water from District 3, there are nearly 100 businesses, churches and several volunteer fire departments served by District 3. The Citizen Potawatomi Nation has provided more than $12 million in financial assistance to District 3 since the asset purchase to benefit its members and water customers.

It is unclear what the objective is for the State of Oklahoma here, other than coerce concessions from CPN. It is unconscionable for the state to seek to deprive its citizens of access to water as leverage to force the Nation to comply with unlawful demands.

The state government and its support services are still reeling from the latest legislative session, where a $1.4 billion shortfall resulted in double digit budget cuts for state agencies. If tribal financial backing is revoked, it is difficult to see the cash-strapped state government step up to assume the costs of the water district’s operation. Governor Mary Fallin has not yet commented on the matter impacting her home county.

Federal law protects RWD3 from any state interference with its right and obligation to provide water service in its territory. It is important to the Nation that the water district continues to serve its existing customers while also expanding service to those county residents needing quality water service. District 3 expects the federal court to order the state to stop interfering with the operations of Rural Water District 3.