Hand games, a fun and traditional event for all 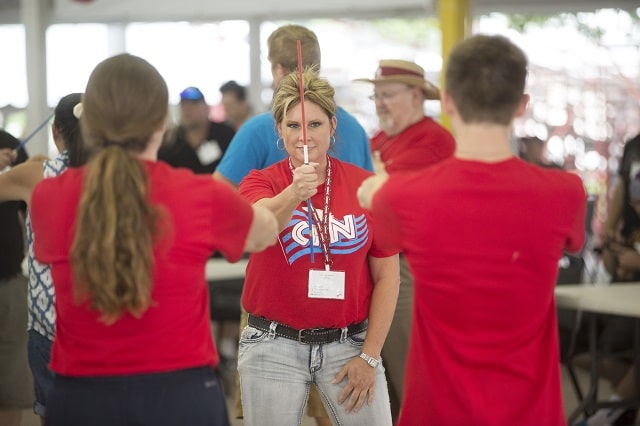 Saturday night during Festival isn’t the only time you can hear the beating of the drum. Friday night has a tradition all its own with a different kind of movement to the beat. Traditional hand games are played the first night of Festival and participants jiggle and jive throughout the event. The hand games are a traditional Potawatomi game played between different families and friends with wagers being placed on each team.

Many teams are put together several months in advance of the event, but an at-large team is always put together the night of the competition. Tribal Chairman John “Rocky” Barrett begins the competition under the Round House next to the CPN Powwow Arena.

Rules for the game are as follows: an individual from a team of seven called a “picker” competes against two “hiders” from the opposition. The hiders each have a bead, which they mix between their hands behind their back. When the hiders are ready, they put their hands forward and the picker from the other team points with a decorative stick at which hands they believe the beads are in.

To score a point for their team, the picker must correctly choose the two hands the beads are in, with no credit earned for one correct hand. Games go to a score of nine. Sometimes, games can take up to an hour for one game alone.

All attendees are offered an opportunity to compete in the event and win prizes. The CPN drum group sings throughout the entirety of the competition that begins at 6:30 p.m. and can last until midnight. To participate be sure and check in several hours before the competition kicks off. For those who want to simply watch the action, report to the Round House in the evening on Friday, June 24, 2016.