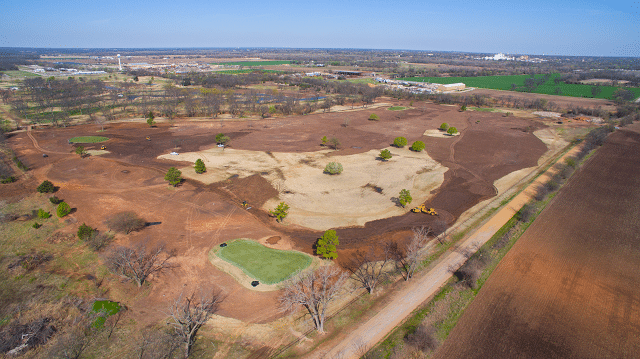 To speed the course’s full overhaul, FireLake Golf Course is set to close in May 2016.

“Initially we wanted to stay open through spring 2016 to give our high school and junior high golfers a place to practice during their season,” said FireLake Golf Course Director Chris Chesser. “Tecumseh and Bethel high schools both play and practice here, and Shawnee Jr. High also practices here. As the only public course in the area, we felt it was important to give them that option.”

With the high school golf season over and dry weather allowing for construction to continue unabated, the decision was made to close the front nine holes immediately to take advantage of the good conditions.

“We considered staying open and opening the back nine holes, which are currently closed for renovation, while we did the front nine,” he explained. “With dry weather forecasted, we felt it best close the entire course and speed up the overall project.”

The practice putting green and the driving range will remain open, though construction work on those may occur in the coming months. Updates will be posted on the FireLake Golf Course Facebook page as well as on www.FireLakeGolf.com.

While the full course’s closure will start in May, the long awaited clubhouse and pro shop are tentatively scheduled to re-open in late May. The pro shop will be fully stocked and operational once open, meaning FireLake regulars will still be able to get golf supplies, shoes and other accessories without driving into Oklahoma City.

“It’s an exciting time to be here. Working here as long as I have, seeing the new clubhouse come up and our back nine rebuilding both come to fruition, it’s really great to see,” said Chesser.

Also planned inside the clubhouse is a new eatery, the Sandwedge Grill, which is tentatively slated to open when the back nine holes re-open.

“We’re shooting to re-open the fully renovated back nine holes in late 2016, depending on whether the new grass we’ve planted is fully matured. Once we have golfers, we’ll be feeding them at the Sandwedge Grill,” said Chesser.

Though the golfers will be gone for a time, Chesser says that his seven staff members will remain on the job. FireLake has sped up construction times and cut some of the renovation’s costs by putting its full time staff to work on demolishing the course’s old cart paths, dredging water hazards and removing trees.

“Our guys are going to be busier than ever actually. With all their normal mowing and watering of the new grass, they’re also doing landscaping of areas that aren’t part of the renovation and helping with the renovation itself,” he noted.

If all goes well, Chesser explained that FireLake will be fully operational, with 18 holes, by mid-2017.