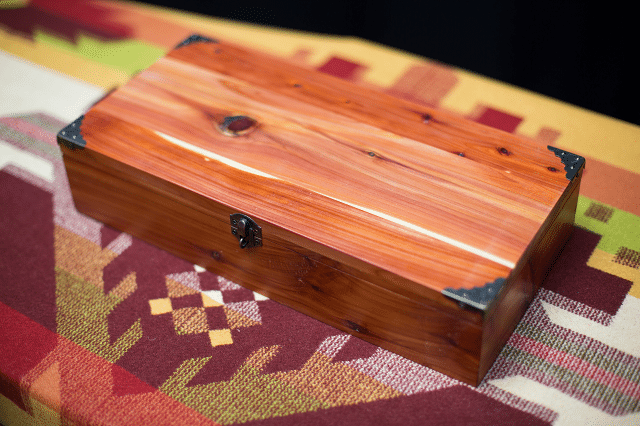 Potawatomi around the world have a distinct advantage of ordering naturally molted eagle feathers from the CPN Eagle Aviary. Only Native Americans in the U.S. have the opportunity to utilize such a service, which along with the U.S. Fish and Wildlife Service’s National Eagle Repository, sends naturally molted feathers to enrolled members of federally recognized tribes. Once the feather arrives, proper care must be taken to protect these objects that are treasured by Native Americans.

Navarre comes from a long line of wood workers. Both of his grandfathers were carpenters, and while his father didn’t take it up as a trade, he possesses the skills to craft wood. A shared wood working connection to his great-grandfather Robert Navarre isn’t solely relegated to bloodlines. To this day, Navarre still has one of his great-grandfather’s large, luggage tool boxes. He enjoyed wood working as a hobby while pursuing other endeavors such as teaching Potawatomi and working for the state parks department. It wasn’t until 2015 that the Whitebead, Oklahoma native decided to pursue this onetime hobby full time.

Navarre estimates that it takes around 48-man hours to fully complete one box. He sources his supplies from a wood dealer as opposed to buying it off the shelves at a hardware store. Much of it is eastern red cedar, which largely comes from southwestern Oklahoma.

“I like to split the wood, because usually, if you split it, there’s a prettier grain pattern. I use eastern red cedar because it has that aroma that acts as a repellent to bugs.”

Mites, grasshoppers and other insects are often put off by the strong cedar aroma from the wood, which is vital to keeping an organic object such as a feather as clean and in-tact as possible.

“A lot of people get an eagle feather and want to display them, and that’s fine,” Navarre explained. “If you’re going to do that though, you need to at least take care of it. At least once a week you need to clean it off and make sure nothing is getting attached to it or attacking it.”

Navarre tells cautionary tales of tribal members who have been gifted eagle feathers and not taken the time to safeguard them. He points out that these anecdotes aren’t meant to shame, but to show just how fragile these sacred items can be. Even to the detriment of his sales, Navarre suggests a novel and affordable method to safeguarding an eagle feather without the use of a cedar box.

“A lot of times, if you’ll just take two pieces of cardboard and run a couple rubber bands around them with the eagle feather in between, you’re protecting it better than just leaving it out where it can get damaged,” he explained.

But the best long term solution for protecting an eagle feather remains cedar boxes. The eagle feather is considered a spiritual symbol by many tribal cultures in North America. For the Potawatomi specifically, the eagles from which they come are viewed as messengers that carry the prayers of people to the Creator. While Navarre acknowledges that each individual person may not share the same perspective in this regard, he likens caring for the feathers as much an act of respect for any other sacred item that is important to another culture.

“It’s understandable that someone may not look at a feather as a sacred item, any more than someone else sees a rosary as important. But if you use a rosary in a disrespectful manner, it can understandably offend someone. When so many of our symbols are organic and attract insects and mites that can destroy them, not storing them properly can be disrespectful.”

When outside the box, Navarre explains that something as simple as cleaning a feather once a week with cedar oil can help mitigate some of these attacks.

“Even if you want to have them just because you’d like one, it is best to take care of them because they do mean so much to other people.”

Another reason to care for the feathers is in large part the length of time it takes to acquire one in the first place. The waiting list for eagle feathers to be issued by U.S. Department of Fish and Wildlife’s national repository can be months or years. Even the CPN Eagle Aviary, which is legally allowed to distribute feathers to tribal members, has so many requests that it can be some time before they are received.

It’s this knowledge of practical and cultural aspects that led Navarre back to crafting wood full time for his business, Native Cedar Boxes. Navarre takes custom orders, but also crafts a wide range of other boxes and items for customers. He also incorporates works of fellow Native artists into his work when he can.

“I have worked with Potawatomi artist Penny Coates, who does beautiful one-of-a-kind paintings on some of the boxes. I have also taught Potawatomi, young and old, in Oklahoma to make similar boxes. It helps promote Potawatomi art and encourages more people to get started with their own craft.”

While their creation is a source of income, he explained that his motivation isn’t to shame people into buying one of his products, but rather, to provide them an option to protect an important symbol of their heritage.

If you would like to learn more about Sam Navarre or his crafts, visit his Facebook page at Facebook.com/NativeCedarBoxes or email him at oldmanriver76@gmail.com.