A saint amongst the Potawatomi 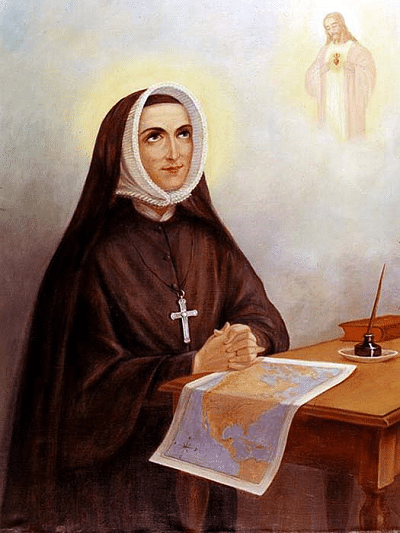 Many know about the Citizen Potawatomi’s long ties to the Catholic Church, with French missionaries first introducing the Christian religion to the tribes of the Great Lakes region as far back as the 17th century. Fewer know the story of one Catholic saint who lived amongst the ancestors of today’s Citizen Potawatomi people.

Rose Philippine Duchesne was born in Grenoble, France, during the reign of King Louis XV in 1769. A devout Roman Catholic nun, Duchesne’s interest in the New World was peaked at an early age upon hearing a Jesuit missionary speak about the American Indians.

Yet her dream of ministering to the original inhabitants of North American would have to wait. The death of Louis XV gave way to his successor, Louis XVI. The weak and ineffective French king was toppled in 1791 by the French Revolution, which turned its wrath on the Catholic Church. The church was seen by many revolutionaries as part of the ancient regime of nobility and clergy who had supported the monarch and oppressed the French people.

Duchesne and her order remained dedicated to their order’s service despite the Reign of Terror’s closure of their Parisian convent in 1792. Returning to Grenoble to live with her family, she continued her service to the poor and also helped hide fugitive priests fleeing the mob violence that accompanied the later revolutionary period.

She was well into middle age as a nun of the Order of the Sacred Heart in Paris when in 1817 the bishop of Louisiana visited in search of potential missionaries to peoples of the former French territory. She arrived the next year, travelling to St. Louis before settling in St. Charles, Missouri. There, with other nuns of her order, Sister Duchesne helped establish convents and orphanages as well as the first school for American Indian children west of the Mississippi River.

It was her familiarity with the territories of Missouri and Kansas and their Catholic populations that first brought her into contact with the Potawatomi of the Woods, who had been forcibly removed from Indiana in 1832 to small eastern Kansas reservation. At the age of 72, she arrived at the Jesuit mission established by the Potawatomi at Sugar Creek and ministered to the people there. Her devotion to her religious order was so pronounced that the Potawatomi referred to her as Quah-Kah-Ka-Num-ad, or “the woman who prays always.”

A legend arose from her devotion to her prayers among the Potawatomi at Sugar Creek. In order to measure her devotion, the Potawatomi scattered kernels of corn on her robe when she prayed to see if she ever moved. According to the story, which is portrayed in numerous pictures of her, including a shrine at Mound City, Kansas, Sister Duchesne amazed the Potawatomi by remaining motionless as she prayed through the night.

There is another, more practical explanation for her devotion to prayer though. Sister Duchesne had only begun to learn English after first arriving in Louisiana in 1818. Her stay with the Potawatomi lasted only one year, giving the elderly nun little time to master their language so as to adequately communicate and teach, as was her specialty.

Faced with the harsh frontier conditions
on the reservation, the elderly Duchesne suffered from poor health and in 1842 she was recalled by the bishop. As noted in Beverly Boyd’s article “Rose Philippine Duchesne,” the nun was saddened by the order for her to return to St. Charles after such a short time living with the Potawatomi.

“It seems to me that in leaving the Indians, I have left my element, and that henceforth I can do nothing but languish for the heavenly country from which, happily, there will be no more departures,” she wrote at the time.

She died in St. Charles in 1852. Still, her dedication to the people to whom she ministered was never forgotten, especially by the Potawatomi. In accordance with Catholic doctrine, Duchesne’s canonization cause was introduced in 1895, followed by the 1909 declaration by Pope Pius X that she was Venerable. Pope Pius XII beatified Duchesne in 1940, before her canonization in 1988 by Pope John Paul II.