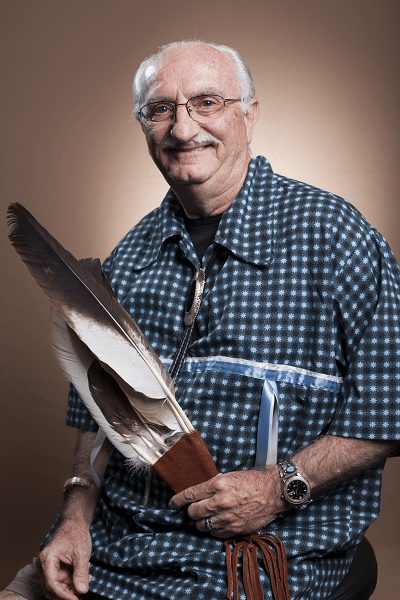 Compared to the Cherokee and Choctaw nations, which boast enrollment numbers in excess of 200,000, the Citizen Potawatomi Nation can seem like a small tribe. Yet amongst its 30,000 members are three politicians representing communities in Oklahoma at the state capitol. Senator Jason Smalley (R-Stroud), Representative Mark McBride (R-Moore) and Representative Paul Wesselhöft (R-Moore) are members of the Oklahoma State Legislature as well as that body’s Native American Caucus. For almost a decade now, when the state capitol is emptying out after a day of business, Wesselhöft is just putting on his second hat as the elected member of the Citizen Potawatomi Nation’s Tribal Legislator for District 9.

Wesselhöft is a native of south Oklahoma City, having graduated from U.S. Grant High School before entering a 18 year career in the U.S. Army. In his nearly two decades as an Airborne Ranger Chaplain, Wesselhöft ministered to soldiers from the Vietnam to Gulf War eras. He retired in 1995 as a major.

Following his military retirement, he served seven years at the Oklahoma State Department of Health where he was the state coordinator for the Oklahoma Abstinence Education Project. During this time he was also appointed to Governor Frank Keating’s Council for Prevention of Adolescent Pregnancy and STDs.

In 2005, Wesselhöft won the District 54 legislative seat having run as a conservative champion of small enterprises. During his time at the statehouse, he has occasionally been in the news for causes that confounded his political allies and critics alike.

Responding to a near fatal 2007 pit bull attack on a child in his constituency of Moore, Oklahoma, Wesselhöft championed legislation that would give cities the ability to ban certain breeds of dogs. In 2013, the Moore Republican partnered with the American Civil Liberties Union of Oklahoma on legislation that would require law enforcement to obtain a warrant before they used drones in targeted surveillance in investigations. His proudest moment came in authoring a bill early in his legislative career that protected military funerals from protesters of from the Westboro Baptist Church by enacting a 150-foot buffer zone from funeral homes.

Most recently, Wesselhöft had been a vocal critic of the University of Oklahoma’s Fred Jones Museum of Art for its failure to return a piece of stolen art to the family of the original owner. The painting was seized by the Nazi regime after the fall of France in 1940 and ended up in the museum’s possession. After hearing about the controversy, Wesselhöft authored House Resolution 1026 during the 2015 legislative session – which passed the Oklahoma House with unanimous consent – calling on the museum to return the painting. While he believed his stance was about righting a wrong made more than seven decades prior, Wesselhöft’s goal was to raise awareness for the principle of returning looted historical pieces to the rightful owners.

“For many Native American artists and tribes forced from their ancestral lands in the eighteenth and nineteenth centuries, pieces of art and artifacts of historical significance rightfully belonging to Native American descendants can end up in museums and galleries without any recompense,” he wrote in a July 2015 legislative column in the Hownikan.

In February 2016, the museum and claimant reached an agreement on its return to France, an outcome that might not have been as likely had Wesselhöft not championed its cause.

As a member of the Citizen Potawatomi Nation, he is also a founding member of the Oklahoma Legislature’s Native American Caucus, an increasingly important bloc at the statehouse. Much of his work in this regard has been to help bridge some of the impasses at the state level when it comes to views on Oklahoma tribes.

“The most serious misunderstanding of tribes and tribal government by my fellow state legislators is their misconception of tribal sovereignty. They do not realize that tribes want to be self-sufficient and autonomous. Somehow they see this as an attack or an encroachment on state sovereignty. I am constantly educating legislators that both entities can exercise sovereignty without destroy the sovereignty of the other.”

Wesselhöft is a descendent of nineteenth century Potawatomi leader Abraham Burnett. Continuing his family’s legacy of tribal leadership, he has served in the CPN Legislature since 2007, representing the at-large Oklahoma District 9. He is also a past delegate for the tribe at the National Congress of American Indians.

“I am so proud to be a representative representing Oklahoma in the only national tribal legislature,” he said. “The resolutions there that make me the proudest are when we increase the dollar amount and number of scholarships for our students. There is no more important thing that we can achieve but to raise the level of education of our youth and give them greater opportunities for success.”

As he nears the end of his state legislative service due to term limits, Wesselhöft plans on applying for a graduate writing program at Columbia University in New York City. The published author intends to focus his energies on the tribal legislature and his newfound free time for writing, but that won’t stop him from focusing on good governance at CPN.

Wesselhöft and District 12 Legislator Paul Schmidlkofer will be sworn in June 25, 2016 for their same seats after no opposition candidates filed.

“I may take a year off to write some new short stories and finish work on a novel,” he noted. “Perhaps I will return to school and pursue a master of fine arts in fiction. One thing is for certain; I will endeavor to make a significant contribution to my tribe and heritage in the Citizen Potawatomi Nation’s Legislature. I am so thankful for the trust of my tribe in electing me to another term. I take that responsibility very seriously.”