This week, the third week of April 2016, Citizen Potawatomi Gift Shop presents these colorful medallions and pendants as the featured items of the week. To shop jewelry online, visit giftshop.potawatomi.org/jewelry. Show off these pieces at the Family Reunion Festival and the Gathering of Potawatomi Nations this summer in Shawnee.

If you would like to purchase an item, Citizen Potawatomi Gift Shop has many items like this that can be seen in our store located inside the Citizen Potawatomi Nation Cultural Heritage Center or online at giftshop.potawatomi.org. 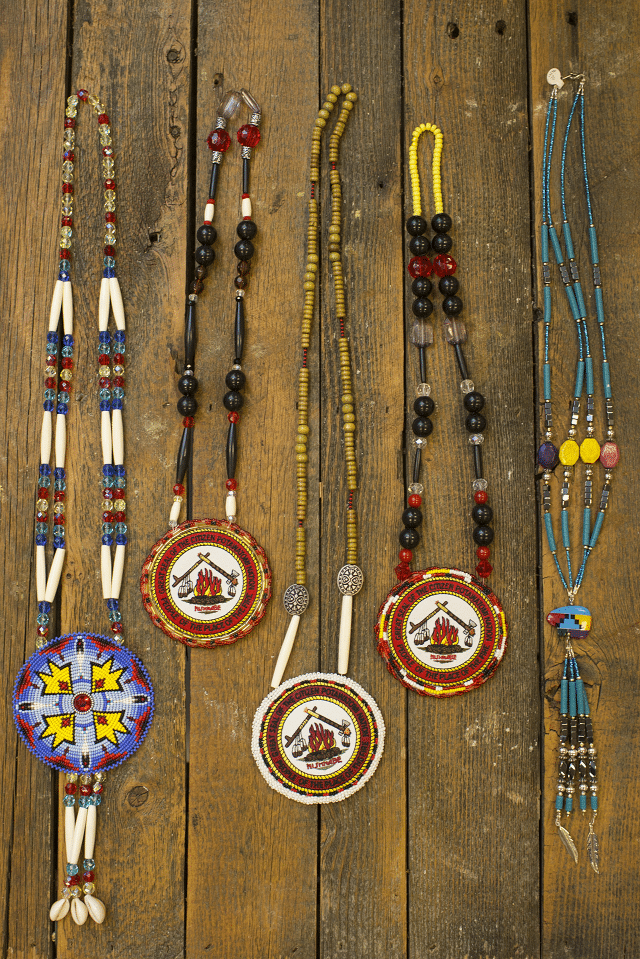 From left to right:

CPN Medallion in full color is enhanced by a black and red seed beaded border. The CPN logo is 3 ½”.   The necklace part of the medallion is made of white and black hair pipe with colorful red, crystal, and amber beads set off by large round black beads and engraved silver round beads.

The CPN logo is 3 ½. The Logo in full color is surrounded by a white beaded border.  The necklace is white hair pipe, unique black and white ornamental beads and rows of brown beads separated by red and black seed beads.

CPN Medallion is 3 ½”.  The CPN logo in full color is encircled with red, white and black seed beads.  The medallion is held by a neck chain of red glass beads, large round black beads separated by small black hair pipe and crystal beads with a semi-circle of small yellow beads at the neckline.

This is a unique turquoise medallion with a multi-faceted bear as its talisman.  The four strands of turquoise seed beads, turquoise round beads and small black square beads are highlighted by silver beads and four large oval beads in black yellow and red.  Suspended from the bear are four strands of the same beading with 2 silver feathers hanging from the two end strands.