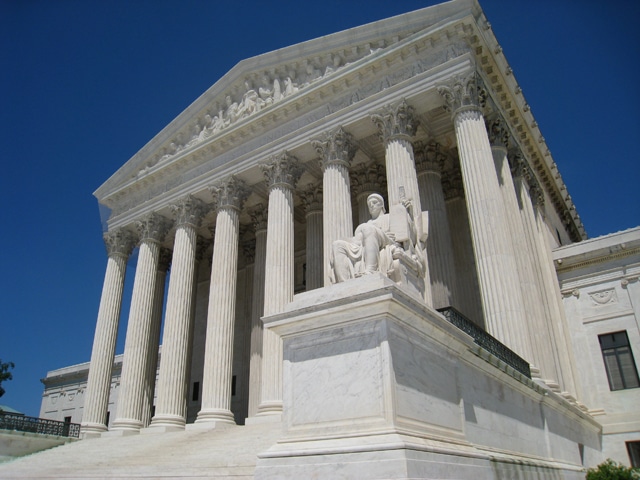 This article is submitted by CPN Tribal Legislator Eva Marie Carney and appears as it did in the Women’s Bar Association of D.C. April newsletter.

As a Native American woman and lawyer who follows tribal sovereignty and constitutional law  developments, as well as initiatives to deter intimate partner violence, two cases pending before the U.S. Supreme Court this term have my particular interest.

The first, Dollar General Corporation v. Mississippi Band of Choctaw Indians, was argued before the Supreme Court in December. It involves the alleged sexual abuse of a Native youth by the non-Native manager of a Dollar General store that was situated on tribal trust land and operated under a lease agreement with, and business license issued by, the Choctaw. The youth was under the manager’s supervision, placed at the Dollar General store through a youth internship program operated and funded by the Choctaw tribal government.

Dollar General had expressly agreed to participate in the program. When the youth and his parents sued  Dollar General and the manager in tribal court, the defendants brought their own suit in federal court, challenging the tribal court’s jurisdiction over them. The specific question the Supreme Court has agreed to consider is “Whether Indian tribal courts have jurisdiction to adjudicate civil tort claims against nonmembers, including as a means of regulating the conduct of nonmembers who enter into consensual relationships with a tribe or its members?”

In Montana v. U.S., 450 U.S. 544 (1981), the Supreme Court held generally that “Indian tribes cannot exercise power inconsistent with their diminished status as sovereigns” but created an exception that permits a tribe to exercise civil jurisdiction over nonmembers engaged in consensual relationships with the tribe or its members on tribal land if there is a nexus between the nonmember’s relationship with the tribe or tribal members and the claims pled. The Choctaw argue that this exception permits them to exercise jurisdiction over Dollar General and its manager. The Choctaw assert that the tort claims indisputably  implicate the tribe’s sovereign interest in protecting its members on its land, and that, by agreeing to participate in the Choctaw tribal government’s youth internship program, Dollar General consented to the exercise of tribal jurisdiction over a workplace sexual assault suit arising directly from that participation.

Dollar General has mounted a strong offensive, asserting that “tribal court jurisdiction over nonmembers is fundamentally incompatible with the United States’ ‘overriding sovereignty’ ”and arguing that tribal courts lack civil jurisdiction over nonmembers absent congressional authorization (e.g., in a statute or treaty) or the defendant’s unambiguous consent (e.g., in a forum selection clause of a contract).”

To date, the Choctaw’s arguments have won the day. Four successive tribunals— the Choctaw civil court, the Choctaw Supreme Court, the federal district court from which Dollar General sought relief, and the Court of Appeals for the U.S. Court of Appeals for the 5th Circuit — have ruled that the suit may proceed in the Choctaw courts. The Supreme Court’s grant of certiorari is contrary to the recommendation of the solicitor general, who argued that that the 5th Circuit’s decision was correctly decided and that there was no split among the circuits requiring the Supreme Court’s attention. Because four justices must agree to take a case for review, there is speculation that four of the justices serving on the Court at the time the case was
accepted disagreed with the 5th Circuit’s disposition of the jurisdictional matter.{jb_quoteleft}United States v. Bryan, will be argued on April 19, 2016. It involves the question whether domestic abuse convictions in tribal courts lawfully may be considered in connection with the felony repeat-offender provisions of the Violence Against Women Act. The defendant successfully challenged as unconstitutional the prosecution’s use of his two earlier misdemeanor domestic abuse convictions in Northern Cheyenne Tribal Court because he was not represented by counsel in those matters.{/jb_quoteleft}

The second case, United States v. Bryan, will be argued on April 19, 2016. It involves the question whether domestic abuse convictions in tribal courts lawfully may be considered in connection with the felony repeat-offender provisions of the Violence Against Women Act. The defendant successfully challenged as unconstitutional the prosecution’s use of his two earlier misdemeanor domestic abuse convictions in Northern Cheyenne Tribal Court because he was not represented by counsel in those matters. The U.S. Department of Justice sought and won certiorari, supported by various amici, including Native women’s rights advocacy groups and the National Congress of American Indians, the oldest and largest organization representing Indian tribal governments, and numerous federal prosecutors.

As background, the U.S. Constitution does not apply to tribal prosecutions. The Indian Civil Rights Act of 1968 (ICRA), 25 U.S.C. 1301 et seq, mandates a range of procedural safeguards for tribal-court defendants, including due process of law, the right to a speedy and public trial, and protection from compelled self-incrimination, unreasonable searches and seizures, double jeopardy, excessive bail, excessive fines, and cruel and unusual punishment. ICRA also mandates that tribal courts provide counsel for indigent defendants who are sentenced to a term of imprisonment exceeding one year, but does not require appointed counsel when a sentence of less than one year is imposed. 25 U.S.C. 1302(c)(2).

Instead, a defendant in a misdemeanor prosecution has the right to the assistance of counsel at his own  expense. 25 U.S.C. 1302(a)(6). ICRA’s counsel provision thus differs from the Sixth Amendment.

The specific question the Supreme Court has agreed to consider in Bryan is: “Section 117(a) of Title 18 of the United States Code makes it a federal crime for any person to ‘commit[] a domestic assault within the special maritime and territorial jurisdiction of the United States or Indian country’ if the person ‘has a final conviction on at least two separate prior occasions in Federal, State, or Indian tribal court proceedings for’ enumerated domestic violence offenses. 18 U.S.C. 117(a) (Supp. II 2014).

The question presented is whether reliance on valid, uncounseled tribal-court misdemeanor convictions to prove Section 117(a)’s predicate-offense element violates the Constitution.”The U.S. Court of Appeals for the 9th Circuit, agreeing with the defendant, voided use of the tribal-court misdemeanor convictions. In his petition for Supreme Court review and his merits brief, the solicitor general has asserted that using tribal prosecutions for enhanced sentences is consistent with ICRA and Supreme Court precedent, and is an important tool in combating rape and other acts of intimate partner violence perpetrated against Native American women. Counsel for the defendant has countered that uncounseled tribal-court misdemeanor  convictions are invalid and unconstitutional when used in federal court to prove an element required in a federal prosecution.

Among the numerous amici filing briefs in support of reversal of the 9th Circuit’s decision is the National Indigenous Women’s Resource Center, Inc., a Native non-profit organization with the mission to ensure the safety of Native women by protecting and preserving the inherent sovereign authority of American Indian  and Alaska Native Tribes to respond to domestic violence and sexual assault.

Joining in NIWRC’s brief are 34 additional organizations that share NIWRC’s commitment to ending domestic violence, rape, sexual assault and other forms of violence in the United States. The NIWRC’s brief offers detailed insights into the extraordinary magnitude of violence perpetrated against Native women today, characterizing such violence as “constitut[ing] one of the greatest threats to the integrity and continued existence of Tribal Nations and their people.”

The upcoming oral arguments in the Bryan case should be compelling.

WBA member Eva Marie Carney is a securities regulation and compliance partner with Richards Kibbe & Orbe LLP, an enrolled member of the Citizen Potawatomi Nation, a federally-recognized Native American tribe, and an elected representative to the CPN Legislature.