As the weather warms up and spring approaches, the time has come for eligible students to submit their application for the Potawatomi Leadership Program. Since 2003, we have invited 18-20 year-old tribal members with a 3.0 GPA who have not completed more than one year of college to spend six weeks in Shawnee, Oklahoma. PLP students get an exclusive glimpse into the culture, governance and economic development of the Citizen Potawatomi Nation.

As PLP advisor, I strongly feel that the program affords a once-in-a-lifetime opportunity to connect to your tribe.

By this point, all eligible students on our tribal rolls should have received a mailed invitation letter fromvice-Chairman Linda Capps and a flyer outlining the details of the program. This year, the program will begin the Friday before the Family Reunion Festival, June 17, and conclude six weeks later on Monday, Aug. 1. While every year is special, I am particularly excited that the 2016 class of PLP students will get to participate not only in Festival but also the Potawatomi Gathering of Nations, which will be hosted in Shawnee this summer. 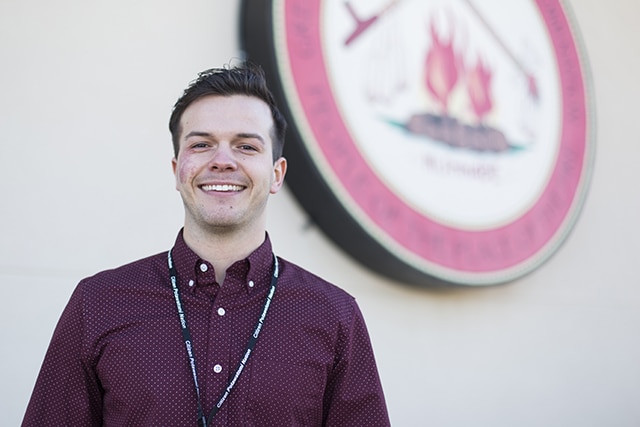 While this short article does not allow me enough space to list all of the reasons that I support the PLP, I never talk  about the program without focusing on what I find to be its most inspiring outcome: the students. It’s tempting to rely on quantitative data to measure the PLP’s impact. While statistics such as the number of students who have returned for internships or employment speak for themselves, that narrow focus, in my opinion, overlooks the  program’s true mission.

The purpose is to promote the development of Potawatomi leaders, which is an effect that lends itself more to qualitative analysis.

It’s the stories of students like Austen Roselius, who freely admits that prior to the PLP, he did not feel truly connected to his Potawatomi identity. Since completing the program in 2011, however, Austen served for three years as the PLP counselor, assembled traditional dance regalia, picked up additional coursework in Native American studies and selected his joint M.D./J.D. program at University of Minnesota based on the opportunity to work specifically with Native American populations.

It’s the testimony of students like Miranda Hazelton, 2013 PLP, who states that it helped her find her place at the University of Texas – San Antonio, where she was instrumental in reviving the Native American Student Club and served as one of its dedicated leaders.

It’s the impact on families such as sisters Lydia and Paulina Davison, 2014 and 2015 PLP respectively, who each returned to their universities in Washington and Arizona to share what they learned about their culture with their fellow students.

There are too many stories like this to name, and really, it’s best when it comes from the students themselves anyway. I highly encourage you to read the final student reflections that have been posted on the PLP website.

To learn more, please visit plp.potawatomi.org, where you can find more details, previous student work, and the online application. Whatever you do, don’t miss the April 15 deadline!

Reach out to me for more information at tesia.zientek@potawatomi.org.