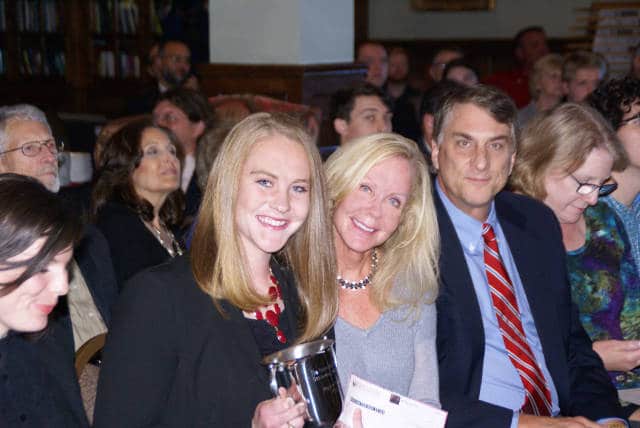 CPN Tribal Member Jenny Carmichael is a member of the Nadeau family and has received numerous academic, athletic and extracurricular accolades during her time at the University of Oklahoma. The following article was originally published on www.soonersports.com. It is reprinted here with their express written permission.

On a fall semester that has already been filled with honors, University of Oklahoma senior and track and field student-athlete Jenny Carmichael picked up the ultimate student honor Friday when she was named the outstanding senior woman at OU.

She will also be honored Saturday during pregame ceremonies prior to the OU-Iowa State game. It is believed she is the first student-athlete in school history to win the award. Jenny Carmichael received the University of Oklahoma’s outstanding senior woman award on Nov. 6 and was recognized by OU President David L. Boren and Marty Dama, president of Sooner Parents.

A chemical engineering accelerated BS/MS major, Carmichael will receive her bachelor’s degree in May, then add her master’s a year later. A discus thrower during the track and field season, she is a redshirt junior in terms of athletic eligibility. Seniors at OU apply for outstanding senior honors through the individual undergraduate colleges. Those applications, which require an essay, are forwarded to the Leadership and Volunteerism area in Student Affairs. A committee of faculty, staff and students select the outstanding senior man and woman, then the colleges select their outstanding seniors.

Carmichael addressed her most significant OU experience in her essay. 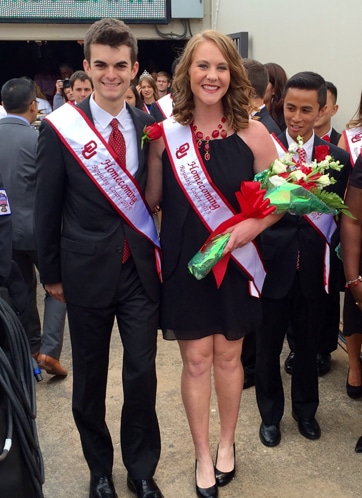 “With the most incredible coach in the nation and teammates who would soon become sisters, I could do anything because they were behind me all the way. While my most significant university experience would undoubtedly be my transformation through athletics, the reason goes far beyond sport itself. It’s not because of meet championships, Big 12 Conference recognition, victories or accolades.The significance behind my journey as a college athlete is so much bigger – it’s about the people I’ve been able to inspire and the way the journey has shaped me.

“As a female discus thrower, a lot of emphasis is placed on being technical, strong, powerful, and explosive. Thus, to grow, I first had to build my technical knowledge and use the laws of physics and  ngineering that I learned in class. Suddenly physics came alive as I pondered how the angled trajectory of my discus release influenced flight due to downward gravitational force on the lifted edge. Similarly, engineering enabled me to contemplate the biomechanical feedback loop occurring with the pressure in my blood vessels as I stretched my right arm to release the discus. Quickly, school became an art to be mastered rather than a subject to learn as everyday life inspired me.”

Carmichael shares her honor with OU faculty athletic representative and the Dean of the College of Arts and Sciences, Kelly Damphousse. The current president of OU’s Student-Athlete Advisory Council, Carmichael made history two weeks ago when she became the first female student-athlete to be named to the Homecoming Court as one of the finalists for homecoming queen. Quick to share praise, Carmichael turned her attention to throws coach, Brian Blutreich.

“He’s been my biggest supporter in all of this. He’s always enabled me to succeed and inspire others in the process, and I wouldn’t be here today without him. I’m so blessed he took a chance on me and saw what I could be long before I saw it myself. If I can one day impact people half as much as he has me, then I know I’ll have succeeded in life. While it is my name on this award, it’s his influence and dedication that should truly be honored.”

In typical Carmichael fashion, even her final words on the essay made animpact in 40 characters or less tweet.

“OU? It’s not the beginning or theend but the journey to inspire the rest. Here’s the pen – how will your story read? #BOOMER.”