Amongst the many communities established inside the historical jurisdiction of the Citizen Potawatomi Nation was the small town of Wanette. Many residents are CPN Tribal members or members of other federallyrecognized tribes, while 47 percent of Wanette Public Schools students are of Native American descent. Located in a somewhat remote portion of southern Pottawatomie County, its roughly 400 residents have never been able to have home Internet access.

So in early 2015 when the school district qualified for a School Improvement Grant, the small community was thrilled to hear that every student would have an iPad to use at school.

“Technology is where everything is going, so our top priority is to get modern equipment in our students’ hands to have them set up for success after they graduate,” said Superintendent Crystal Shaw.

However, education officials soon realized that they needed some assistance in connecting the new devices to the schools’ existing Internet infrastructure. The school superintendent reached out to CPN for assistance to help upgrade Wanette schools’ wireless Internet network. Tribal Information Technology Director Dennis Dyer, whose staff deals with such situations in its every day work, agreed to offer the Tribe’s assistance. 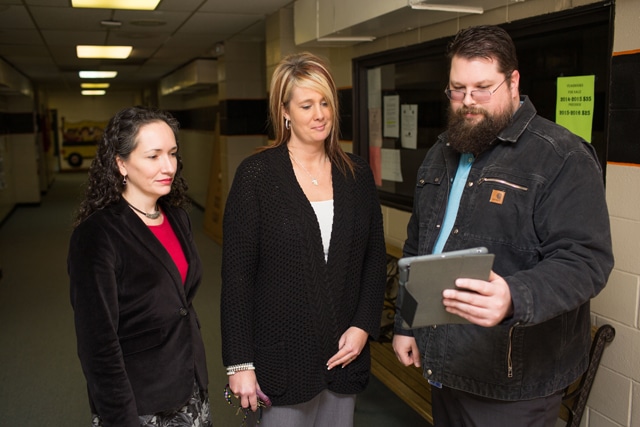 “Our end goal is to make sure small surrounding schools have everything they need to be successful and have the same chance as everyone else in the state,” said CPN IT  Director Dennis Dyer. “On behalf of the Tribe, we feel it is our duty to see what we can do to help improve the education environment for the communities around us.”

Dyer assigned Tribal member and CPN Assistant IT Director Linda Arredondo, to head up the project. “When we first went down there, we were only expecting to install wireless
routers throughout the school,” said Arredondo. “Very quickly though, we found out the system would need a complete overhaul.”

When Arredondo and CPN IT staff began to set up the wireless routers, they realized that Wanette’s existing network connectivity was undersized and outdated.

CPN IT professionals met with school officials and assessed the situation. It was ultimately decided that Wanette couldn’t afford to purchase all new equipment on its own. With more than 90 percent of the students qualifying for subsidized lunches and a median household income well below the state average, another tactic was needed. Wanette officials learned that the school qualified for the Oklahoma Community Anchor Network, a staterun project providing networking and broadband access to underserved communities.

Through OCAN, telecom giant AT&T was hired to supply and install networking fiber to the school. The fiber was the starting point, but further action was needed to get the school connected. Arredondo worked with Cisco’s Meraki Cloud Services to install cloud-managed access points, allowing CPN to oversee and monitor the school’s wireless network as needed.

Oklahoma-based United Systems then stepped in to provide a free assessment of how best to maintain a secure network. United Systems also specializes in locking down IT systems for school safety reasons and provided this to the school’s new wireless network service.

“This wouldn’t have been possible if it wasn’t for CPN. We are grateful for every minor detail they’ve helped us with,” said Shaw.

Wanette students returned from the holiday break with a large digital cloud hanging over their spring semester.

“Although the process was slow, the students came back from their break to the newly installed wireless Internet,” proclaimed Shaw. “CPN is always willing to help out in the community and we are thankful they understand what this means to the students.”

While the students are sure to enjoy the use of the iPads, the new wireless infrastructure will also assist educators as they perform the state-mandated testing regimen, which is done online. The Tribe has long partnered with the community for a variety of services given that so many members and employees live there. Since 2007 CPN has provided water to the town of Wanette through Rural Water District 3 at a commercial rate, and this latest project was almost $30,000 in equipment and man hours.

“It’s about community,” concluded CPN’s Dyer. “Reliable Internet access is as important as electricity and a safe building when it comes to educating our kids, so while it was a lot of work, it was definitely a worthwhile investment for us.”