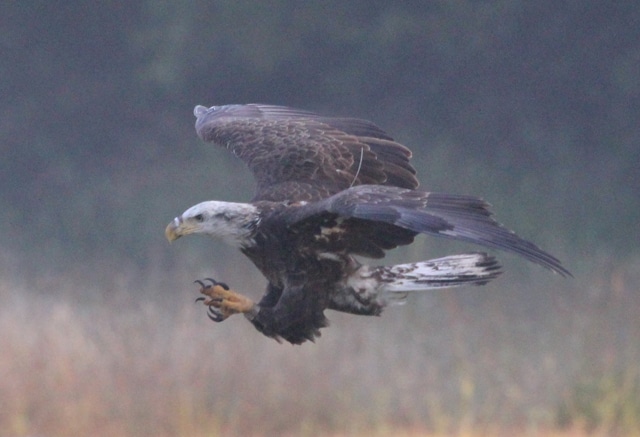 Nov. 10 was the last morning that Wadasé Zhabwé visited the aviary. She arrived early from her roost in the east pasture and spent the better part of the morning out front, perched high in the pecan tree where she could catch the warm rays of the morning sun. By midday the had headed towards the river and out of sight. Checking telemetry
we know she followed the river to the northwest and eventually stopped just outside Harrah, Oklahoma to roost along the North Canadian River.

After spending a week in the area, moving up and down the river between Harrah and McLoud, she set out on a wide loop around the central portion of the state. Wadasé followed the river north through Jones and on to Lake Arcadia before turning south. When she reached Spencer she headed southwest through Forrest Park and then flew towards
Oklahoma City. Her path took her directly over St. Anthony Hospital at approximately 1,500 feet in the air. She continued on to Mustang before turning again to head southeast.

Over the next several days she made her way through Newcastle, Blanchard, Cole, Payne and Lindsay. Then early on Nov. 22, she headed directly for the aviary at sunup, passing through Rossdale, Tribbey, Macomb, Tecumseh and right over us before stopping north of Prague.

Even if we had known to look for her, we may never have spotted her because she was cruising 2,000 feet above us. After a short layover she headed west on Nov. 24 towards Davenport, passing just south of Chandler and Welston before turning once again on a course south to return to nearly the exact location from where she had originally left near Harrah. Since her return she seems content sticking to a five mile stretch of the river there. During her seven day fly about, we calculated that she flew no less than 250 miles. So, perhaps she is resting up for her next trip.

This December, well before the first official day of winter, we have already had several days with temperatures below freezing and even had our first ice storm. We were on the eastern edge of the front and fortunately we did not have any damage from the ice, unlike our neighbors to the northwest. While we were hopeful we might see Wadasé return before the storm as she has in the past, we did not see her. 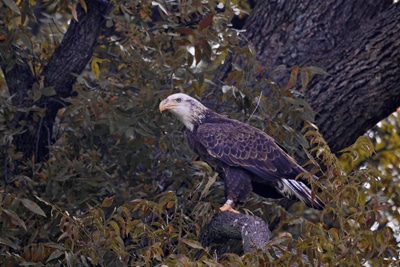 After studying her telemetry, we know that during the inclement weather in the worst of the storm she sat nearly two days with little movement along the river conserving energy. Midmorning after the storm passed, when the temperatures rose above freezing, telemetry shows increased activity low along the river as she was most likely hunting to make up for the past few days. We will continue making regular trips out to the areas she frequents as we monitor her telemetry closely this time of year, looking for signs of other eagles nesting in the area and seeing if she shows any interest in a potential mate and nesting herself.

There is a possibility that we could see that happen this year. The area she returned to from her trip would be a suitable area for her to nest and raise young. There is an abundant supply of waterfowl and fish and other eagles in the area. But we are still hopeful she will come closer to home to nest. If we had a say in the decision we would choose the pecan tree right out front. In any case, we are thankful for her telemetry and the amount of data we are able to
collect and blessed to have the opportunity to continue sharing her story with everyone. As always we encourage you to keep your eyes out for Wadasé if you are near the areas she frequents.

To follow her movements with us you can visit www.arcgis.com/home and search for “Potawatomi eagle.” Send your encounters with Wadasé or any other eagles in Oklahoma or wherever you may be to the CPN Aviary.