Taking advantage of the late 2015 weather, staff at FireLake Golf Course began the second phase of the course’s long awaited upgrade of the back nine holes. The renovation will include new teeing surfaces, re-contoured fairways, drainage, state of the art irrigation system and wider cart paths.

“This course is almost 33 years old, and in that time we haven’t undertaken a project as necessary or large scale as this one,” noted Chris Chesser, golf course director.

Chesser estimates that since joining the golf course in 1992, the biggest renovation FireLake has undertaken was the 2009 replacement of the greens with Champion Bermuda.

“In many instances, we have the same irrigation and cart paths that were put in during the course’s construction. It is just time to get some of that upgraded.”

In the early weeks of December 2015, staff began pulling up cart paths and draining several ponds on the back nine holes. New 8-foot wide paths, the industry standard, will be laid.

“The cart paths being wider allows our mowers to drive on them while it’s wet outside,” explained Chesser. “Right now our machines cause ruts on either sides of the original cart paths because they’re not wide enough.”

Superintendent Derron Day and his staff some of the warmer days in late December putting their noodling skills to use on holes 14 and 15, hand fishing the water hazards’ stock and moving them in the course’s other ponds. The old ponds will be filled in and will be replaced with grass swales and drain basins. Originally too shallow and with higher elevation than the surrounding parts of the course, the ponds currently do not serve as drainage retention; meaning even small amounts of precipitation caused that section of the course to flood. 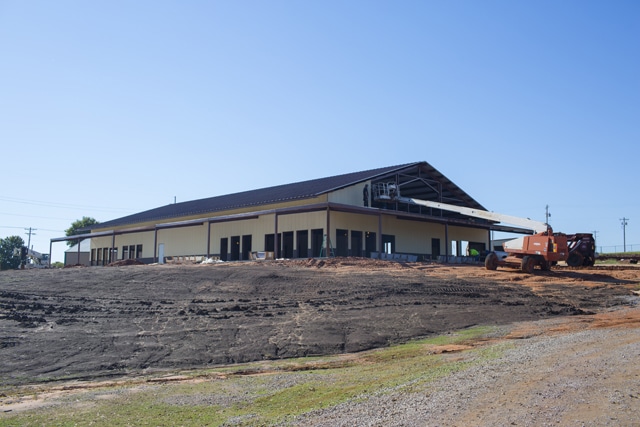 In addition to the irrigation updates, the fairways will get new grass with Astro and Latitude 36 to meet the highest rated cultivar of turf grasses.

The back nine revamp overlaps with the course’s current big project, the construction of the new club house, which is on schedule to be completed in spring 2016.

Chesser acknowledges that the closure of the nine holes will be difficult for some of the course’s regular customers, but insists that over the long haul, it will be worth it. As Shawnee, Oklahoma’s only public golf course, FireLake has been in need of renovations for some time.

“In 2010, before the fire that destroyed the original club house, we hosted 92 tournaments. In 2015, we hosted 51. At the end of the day, when these projects are completed, we’ll be one of the top golfing destinations in the state and one that is affordable as it is fun to play,” said Chesser.

The course’s rates will remain the same during the renovations, which are tentatively scheduled to conclude in late Sept. 2016. For more information about FireLake Golf Course, please visit www.firelakegolfcourse.com or visit their Facebook page at www.facebook.com/firelakegolf.