Don’t let anyone tell you that Oklahoma’s tribal nations aren’t paying their fair share of fees and taxes to the state government. According to a report released by the Oklahoma Indian Gaming Association, tribes have paid $980 million in gaming fees to the State of Oklahoma, while their gaming operations have a $6.9 billion impact throughout the state.

Tribal jobs are often a primary source of income and benefits for many Oklahoma families. According to the report, tribal gaming in Oklahoma would rank as the nineteenth largest industry in terms of employers in the State of Oklahoma, with one in every 55 jobs directly related to tribal gaming. These employees spent $1.09 billion in Oklahoma derived from their employment earnings.

In rural areas that number is especially significant. For example, CPN alone has created 70 percent of new jobs in Pottawatomie County, where its Tribal gaming operations are  located, in the last decade. Exclusivity fees received by the state government go to the Education Reform Revolving Fund, the General Revenue Fund and the Department of Mental Health and Substance Abuse Services. Of those funds, ODMHSAS receives about $250,000 per year, while 88 percent goes to the education fund and 12 percent goes to the general fund. The money derived from these revenues goes to the use of all of the state’s citizens.

Citizen Potawatomi Nation opened FireLake Bingo in 1988, shortly after the Indian Gaming Reorganization Act was passed. That location, near CPN Tribal headquarters, offered one game of bingo and one game of pull tabs each night. In 1995, the Tribe renovated the center and added a bowling alley. The bowling alley has since been removed to a separate location and that gaming location is known today as FireLake Casino. Citizen Potawatomi Nation opened Grand Casino in 2005 and rebranded the property and completed a hotel and event center in 2013.

The Citizen Potawatomi Nation had a $540 million impact in Oklahoma for 2014. CPN directly supported 2,100 jobs and paid $78.6 million in wages and benefits. CPN indirectly supported thousands more jobs and boosted local economies by making purchases of more than $212 million on goods and services. 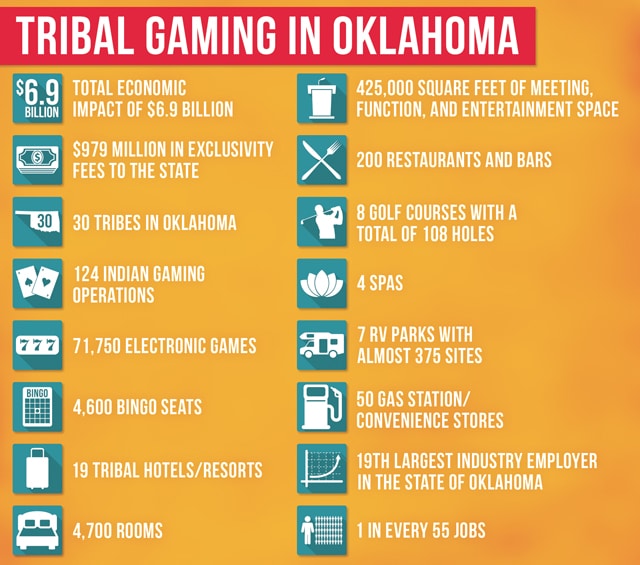