In each stage of the Citizen Potawatomi Nation’s growth as an economic engine and employer, the Tribe has often tapped into assets currently used by one of the many Tribal departments or commercial enterprises. CPN’s ability to find the best person for the job, whether searching inside or outside its current roster of employees, is a testament to its diversity as an employer.

In its current stage of growth with the progress on Iron Horse Industrial Park and the 2013 signing of the HEARTH Act, one Tribal employee has been appointed to a new role. Familiar to many around the CPN Tribal Administration building, longtime employee Kelley Francen has recently been appointed the Tribe’s new leasing and tax coordinator. The Hownikan spoke with Francen about her background, what brought her to work for the Tribe and what her new position will entail. 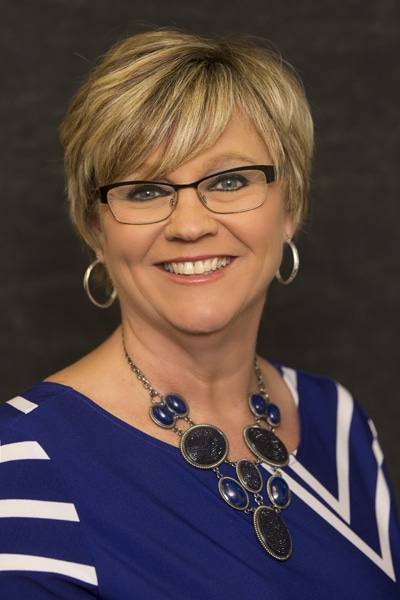 “I was born in Vineland, New Jersey but I was actually raised in sunny California. My family moved to Chandler, Oklahoma when I was in junior high school. As one can imagine, coming from a large suburban area of Los Angeles to a small rural Oklahoma town was a bit of an adjustment. But I quickly settled in and Chandler soon became home.

“For the next 30 years I lived and worked in the small community; raising my children, establishing roots and lifetime friendships. I particularly enjoy the fact that not only did my children and I graduate from the same high school; we also had some of the same teachers. My daughter Nicole and I moved to Shawnee in 2012. She also works for the Tribe in the Child Development Center where my granddaughter attends.”

What did you do before you joined CPN?

“My first real job was working with the county child welfare system. It was through that job that I realized I had a deep desire to want to help make things better for individuals. In 1986 I accepted a position with a small local private-non-profit organization administering federally funded job training programs. During my 20 years there, I had the honor of touching the lives of many people, assisting first time job seekers to high level professionals displaced from their jobs. I worked extensively with these individuals determining employment needs identifying their areas of interest and assessing their abilities in order to match their talents to appropriate occupations. Much of the time they were at a significant turning point in their lives and were often at a loss as how to proceed. Through solid leadership and effective case management guidance, individuals were able to weave through obstacles and move forward.

“It was also during this time that I was given the opportunity to go to college. Working full time, raising three kids and going to school was not always easy. It took a great amount of commitment and dedication; ten years’ worth to be exact. Reminiscing of the sacrifices made along the way, I can easily say that graduating from the University of Central Oklahoma is my greatest achievement. I have a BS in Training and Development, which is a blend of adult education and human relations.”

How did you end up as a CPN employee?

“After 20 years with the private non-profit, the company made the difficult decision to dissolve. Richard Brown, CPN HR director and longtime personal friend, was instrumental in bringing me on board. He previously worked for the Oklahoma State Employment Service and we had become acquainted through various workgroups and committees.

“In 2006, the Tribe was gearing up to open the Grand Casino and was hiring additional HR recruiters and I was hired, eventually becoming training manager where I focused on the creation of a three-tiered leadership and management program. I also created and implemented an employee development program to provide intensive one-on-one instruction to frontline employees with the desire to increase their employability skills.

“In 2012, I accepted the position of assistant director in the planning and economic development department. My focus was on building relationships with various business and trade developers, as well as marketing and promoting the tribes commerce, managing grants and tracking project expenses. One of the most personally rewarding grant projects was my involvement with the partnership with the American Red Cross. Through that grant, we were able to award nearly 100 storm shelters to families affected by the recent deadly storms that ripped through our area.”

Tell us a bit about your new position.

“Currently I am transitioning into a new position as a leasing and tax coordinator. With the recent passage of the  HEARTH Act, the addition of leased enterprises has created the need for a coordinator to help monitor financial transactions relating to leasing compliance.

“In this position, I will act as a liaison between the CPN and internal departments, outside agencies, tenants and vendors to coordinate financial transactions related to leases. In addition, I will operate as the tax coordinator for all enterprises, and work closely with accounting to ensure that tax collections are in compliance with CPN rules and regulations. This work is important because under the HEARTH Act, CPN can now leverage our assets to promote economic development and strengthen self-determination and tribal sovereignty by collecting the appropriate taxes under tribal statutes.”