Climate change is the idea that the gradual warming in the average temperature of the earth will motivate impacts such as sea level rise, severe droughts, more extreme weather events and changes in plant and animal species. These impacts can be harmful to many people and communities. Climate change continues to be a controversial topic, but we have evidence that human activities such as burning coal and deforestation are responsible for a signifi cant portion of the warming. Many people do not want to take the responsibility to change how they live in order to avoid imposing these harms to future people.

As Indigenous peoples, I don’t think we should see climate change as anything that is particularly new for us as an important topic. In fact, we should understand that we have been part of this conversation about how to adapt to and take responsibility for the changing environment for a long time.

For example, our own Potawatomi ancestors lived according to seasonal rounds in which community members monitored changes from season to season, year-in and year-out, in order to know how and when to cultivate and harvest subsistence plants and animals for the survival of the community. 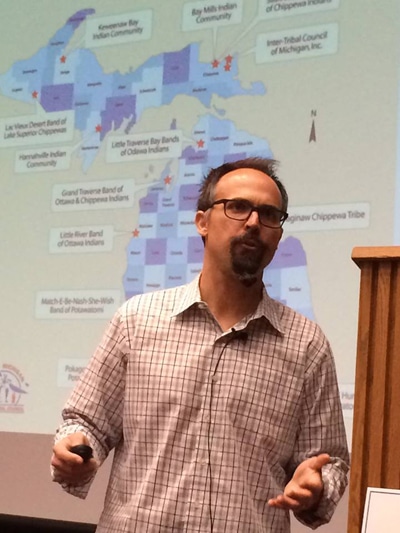 Potawatomi are not the only Indigenous peoples who lived this way. This fact may explain why Indigenous peoples in North America are among those most concerned with climate change. Alaska Native villages, such as Kivalina, are permanently relocating due to sea level rise.

Yet also for us Potawatomi, this is sadly familiar, as we are not strangers to relocation. CPN member Robin Wall Kimmerer, Ph.D., an ecology professor at SUNY College of Environmental Science and Forestry in  New York notes that “Once again, we are in a situation of forced climate change adaptation. We can think of how we can draw on the resilience of our ancestors…who experienced dramatic climate change produced by removal from our traditional homelands. That is what we need together is resilience.”

In many regards, the climate is expected to change in a manner as dramatic as the changes experienced by our Potawatomi ancestors forced from the shores of Lake Michigan to the rolling plains of Oklahoma. It’s not only about Potawatomi history though. Absentee Shawnee Tribal member Paulette Blanchard, now a doctoral student at the University of Kansas, recently completed interviews of participants from 33 tribes in and around the south central region for her master’s degree at the University of Oklahoma. The interviewees expressed concerns about climate change relating to their perspectives of water quantity and quality, changes in weather patterns with increasing extreme events, and cultural, economic and environmental sustainability.

Potawatomi of all bands are taking leadership everywhere on climate change. CPN member Mike Dockry, a scientist for the U.S. Forest Service, spent 10 years working with the Sustainable Development Institute at the College of Menominee Nation in Keshena, Wisconsin where he helped organize several large conferences on climate change attended by tribes from all over North America. In his current job, he works with tribes in the Great Lakes region on how to best plan for climate change. His research is showing that Native people often understand climate change as a symptom showing that our human relationships with the natural world and each other have been damaged and need to be renewed.

Praire Band Potawatomi member Ma’Ko’Quah Abigail Jones, who has a bachelor’s degree from Dartmouth College and a master’s degree from Vermont Law School, served as a student leader of the Center for Environmental Leadership Training, of the Climate Institute in Washington D.C and organized a tribal climate change conference at Dartmouth. She is currently researching climate change policies and Indigenous communities who face displacement and relocation.

The Forest County Potawatomi Tribe hired Tansey Smith, a member of the Reno-Sparks Indian Colony, as their sustainability coordinator where she oversees a climate change planning project. Smith received her master’s degree in environmental law and policy from Vermont Law School. The environmental department of the Nottawaseppi Huron  Potawatomi recently worked climate change into their educational programs and environmental programs, such as one on wild rice for youth. Our Neshnabé relatives in the Great Lakes region are taking important steps too. Karen Diver, Chair of the Fond du Lac Ojibwe, served on the U.S. President’s State, Local, and Tribal Leaders Task Force On Climate Preparedness and Resilience.

The Little Traverse Bay Bands of Odawa Indians adopted the Kyoto Protocol, a former global agreement seeking to reduce emissions. The Grand Portage Band of Lake Superior Chippewa and the Red Lake Nation created their own climate change plans, while the Sault Ste Marie Tribe of Chippewa Indians was recently recognized as a Climate Action Champion for their work on climate change planning and energy savings.

It seems clear that Potawatomi and other Indigenous peoples are taking climate change seriously. Native people from throughout North America and the world are forming networks to learn from each other, contribute to research and lead climate change thought. For doing so is connected to our sovereignty, quality of life, heritage and a way of being responsible for future generations.

Kyle Powys Whyte, Ph.D., is an enrolled member of the Citizen Potawatomi Nation and holds the Timnick Chair in the  Humanities in the Department of Philosophy at Michigan State University. He is a faculty member of the Environmental Philosophy & Ethics graduate concentration and serves as a faculty affi liate of the American Indian Studies and Environmental Science and Policy programs. His primary research addresses moral and political issues concerning climate policy and Indigenous peoples and the ethics of cooperative relationships between Indigenous peoples and climate science organizations.