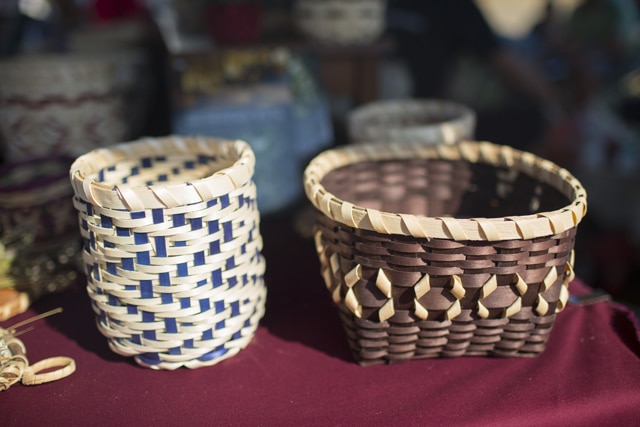 A 2009 documentary captures the story of Gun Lake Potawatomi Tribal member, Steve Pigeon and his family. The movie, “Black Ash Basketry: A Story of Cultural Resilience,” details Pigeon’s teachings and experiences making traditional Native American black ash baskets. Similar to their work in the film, Pigeon and his family gathered around a small tent during the 2015 Potawatomi Gathering of Nations in Carter, Wisconsin to practice the age old tradition of black ash basket weaving.

Pigeon grew up around basket weaving, learning the skill from his mother and father who likewise made baskets as young children as well. Pigeon introduced his wife Kitt to the practice and she eventually apprenticed under her father-in-law.
“My dad was really patient with her and taught her everything,” said Steve Pigeon. “She would write down like a recipe in a book how to make each kind of basket and each different design.”

Continuing the family tradition, Kitt taught their children how to make baskets, a tradition that continues to ripple down to their spouses and children.

The skills have passed easily between the generations, but the art of basket making is not without challenges. In 2002, an invasive species of insect called the Emerald Ash Borer was found in North America. The beetles eat into the bark of ash trees and burrow deep in the trunk, cutting off access of nutrients the tree needs to survive. Currently there are efforts to try and control the bug, but the beetle has already done quite a bit of damage to the northeastern forest in the U.S.

“There’s just billions of bugs laying billions of eggs and they don’t seem to miss a tree,” said Pigeon. “There is just dead ash all over Michigan. Down in the Lower Peninsula we’ve only been able to find small ones; there are just not any big ones left.”

As a result, Pigeon and his family have not been able to make as many baskets as they once did.

However, the limited supply of trees has not stopped the family’s three living generations of weavers from creating and teaching ash basket making.

“The guys pound the wood and the girls work up the wood to get it ready to make into baskets,” said Pigeon. “Right now I do all the whittling and make all the handles and rims. Everyone knows how to do everything so anyone can make any kind of basket they want.”

Pigeon and his family enjoy teaching their trade and can take big groups on at a time. When they do have the wood anyone from the family can make at least two to three baskets a day. Besides making small intricate baskets, they also make big picnic baskets and clothes hampers. Pigeon explained that they copy basket patterns they’ve seen in museums and old pictures. The reason they do this is to try and keep the same designs that the people have had forever.

“There’s not enough basket makers right now though, I hope it continues to be a tradition and cultural practice,” said Pigeon. “I just wish more people would learn how to do it.”

The Pigeon’s family baskets are for sale in Oklahoma through FireLake Gift Shop, which can be reached at 405-878-5830 or by visiting giftshop.potawatomi.org/. For more information about Pigeon and his family lifewaysinstitute.org/lifewaysinstitute/Black_Ash_Basketry_Film.html.