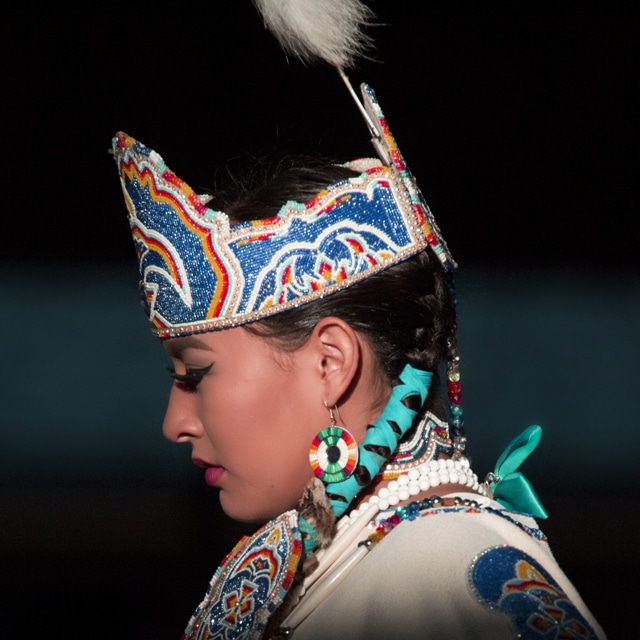 Catherine Katie Howell, a 15-year old Tecumseh, Oklahoma resident, had the honor of being named head female dancer for the Gathering of Potawatomi Nations this year in Carter, Wisconsin.

What was it like to be head dancer this year?

“I’m from Oklahoma and nobody really knows me here in Wisconsin. It is such an honor to be asked at a Gathering as big as this.”

How long have you been dancing?

“I was brought out into the arena when I was two and began dancing at three. I am now 15, so I have been dancing quite a while. When I first began, I was dancing jingle and then I got more into the southern cloth style. Now I am dancing southern buckskin.”

Can you tell us about your regalia?

“I wear the Comanche style war dance dress. It’s usually red and blue. The women wear that to back up the men and everything when they watch over us. We usually wear otter caps and yellow moccasins.”

What is your favorite part of dancing?

“When you are in the arena it makes you feel good. If you are angry, bothered or whatever, it takes that away from you. You leave that in the arena and it is replaced with a good attitude and a positive mind.

What would you say to young women who may not dance yet but are interested in learning?

“I’d say get to it. It’s not at all boring and is so much fun. It is a lot of travel if you compete but you get to meet new people and make new friends. It is an honor to have the ability to dance.

“You may not be the champion dancer but it’s good to use the ability that God gave you.”