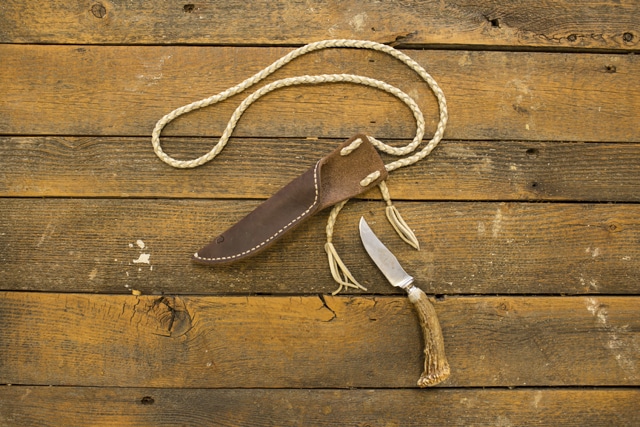 Each year at the Potawatomi Gathering of Nations, vendors set up booths just outside of the dance arena for attendees to buy gifts and handmade crafts. One vendor, whose products come marked with their unmistakable red heart stamp, stands out amongst the many present. Hal Wiggins, whose Potawatomi name translates to “Red Heart,” is a Pokagon Band Potawatomi tribal member and owner of Red Heart Native American Art.

Wiggins initially got into the business through his shaping and crafting of knives following his retirement in 1999, explaining that he simply was looking for something to do. Now, 14 years into his second career, Wiggins handmade products are made with the care of a true craftsman.

“I’ve been collecting old table, carving and butter knives from the 1820s through the 1920s,” said Wiggins. “After 1890 the handles became plastic and I’ll knock the handle off and replace it with a piece of an antler to give it a new handle.” Wiggins continued, “Usually a butter knife will become a camp knife and the larger knives like a butcher or carving knife become a skinning knife.”

Wiggins explained that it’s difficult to say how long it takes him to make a knife. He makes 10 to 15 knives at a time, working on each one a little bit at a time.

“It may take up to three to four hours to make the sheath and the knife,” said Wiggins. “I do everything to the handles and sheaths; from the beadwork, to cutting the leather and
braiding the lacing.”

He also makes many other items that have a strong traditional Potawatomi influence, such as the turtle rattle.

“I cover the rattles with elk hide and fill them full of deer corn or BBs,” said Wiggins. “If the turtle shells are small enough I’ll make a necklace out of them.” 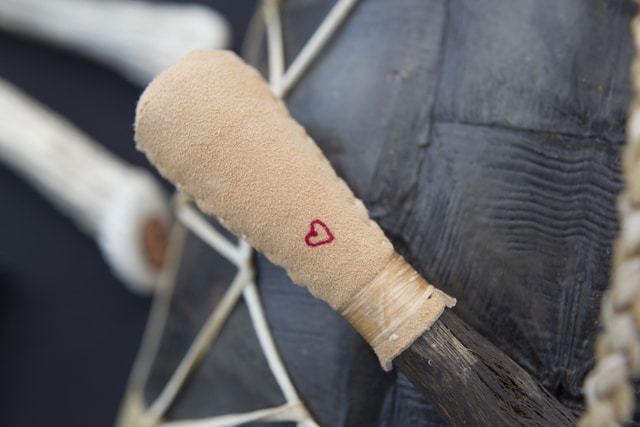 Wiggins uses natural material for all of his creations. He’s made 20 bear claw necklaces and is able to use real claws provided by select vendors across the United States. One of his favorite pieces to make is the turtle drum. Like everything else, he uses real snapping turtles for the drum. “I first saw them 60 years ago in a museum down in Tennessee,” said Wiggins. “From then on I’ve always used that inspiration for the 217 turtle drums that I’ve made.”

Wiggins treats his “hobby” as just that, choosing to not have an online presence and only work the powwow circuit as a vendor, although he does work with some repeat customers. “I try and stay away from doing business at home,” said Wiggins. “I do  have calls from people that I’ve met throughout the years and I am able to send them my products.”

Wiggins’ items are for sale in Oklahoma through FireLake Gift Shop, which can be reached at 405-878- 5830 or by visiting http://giftshop.potawatomi.org/.