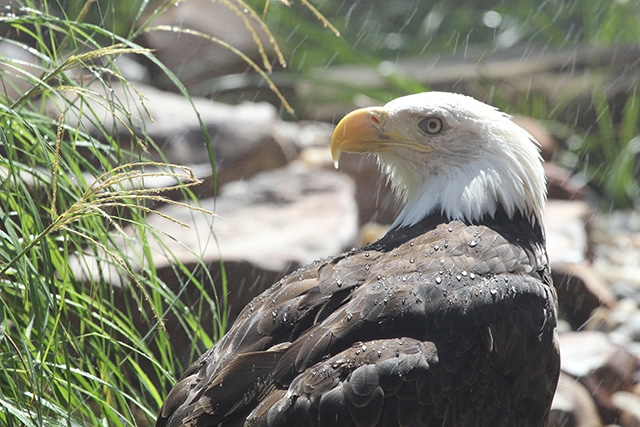 The typical heat of an Oklahoma summer has finally arrived. While we were fortunate to enjoy a few weeks of cooler than normal temperatures for late July, the first of half August saw days with  temperaturesnear 100 degrees Farenheit or above. The eagles at the aviary are enjoying the cool water misters in the enclosures on hotter days. During this heat they aren’t as active and often will not eat every day. An eagle’s body temperature is 106 degrees, and they can actually overheat from eating. We adjust their feeding schedule to feed early mornings or late evening to avoid the extreme temperatures.

This time last year Wadasé Zhabwé was still up north, near Ponca City, along the Salt Fork of the Arkansas River. However, this year after a brief visit north, she has been just 30 miles west of the Aviary in an area a few miles south of Lake Arcadia along the North Canadian River. Since her return to that area on June 20, Wadasé has remained in a 3-square mile area that holds barely more than five miles of the North Canadian River. She has not ventured very far from the river recently and there were days when her recorded movements were less than a mile altogether. We were initially concerned about her limited movement and made several trips to the area fearing she might be injured. With no positive sightings, we reached out to local landowners for permission to gain access to other areas along the river that we could not reach. After checking our recorded search locations against her new telemetry, we know many times she was nearby but must have been just out of our sight in the cover of the trees along the river. 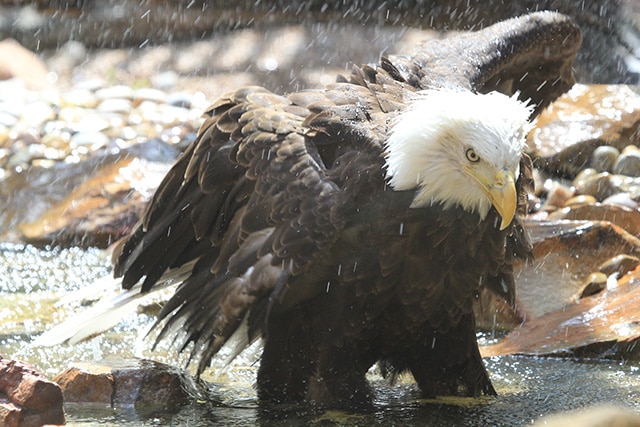 To compound our worry, in the last 30 days her backpack battery has been drained and has not transmitted data for spells of two and three days at a time. Fortunately, this past week’s worth of telemetry has been consistent with complete data. After studying each day of data individually a pattern emerged that we realized was influenced by the weather. On extremely hot days she spent much of her time in one area, limited her activity and sometimes covered less than a mile between all of her recorded data points. Often, on those days, there is only one or two points right on the river, so perhaps she did not even hunt that day. When the temperature was even a few degrees cooler, she was much more active and recorded dozens of points up and down the river. She covered several times the distance as she had on hotter days.

To our relief, one of those points telemetry recorded her flying 2,000 feet high at speeds in excess of 30 mph. We know now that there was never a cause for too much concern. Wadasé’s behavior mirrored the eagles here at the CPN on those hotter days. By not having a cooling mister to relax in, she was not very active and sat in the coolest spot she could find.

Smart girl. There’s just no need to overexert yourself in the heat. Not having had a positive sighting in the last month, her telemetry continues to be a valuable tool, even with the gaps in data. We suspect the battery drain was a combination of two things; the feathers growing in after this year’s molt likely obstructed the solar panel and her increased time on a well
shaded perch.

Send your encounters with Wadasé or any other eagles in Oklahoma or wherever you may be to Jennifer. randell@potawatomi.org.