Keeping a sunny and playful disposition comes in handy in most lines of work, but the talent for gallows humor is even more important when you’re on the front lines of social services like the Citizen Potawatomi Nation Indian Child Welfare Department. 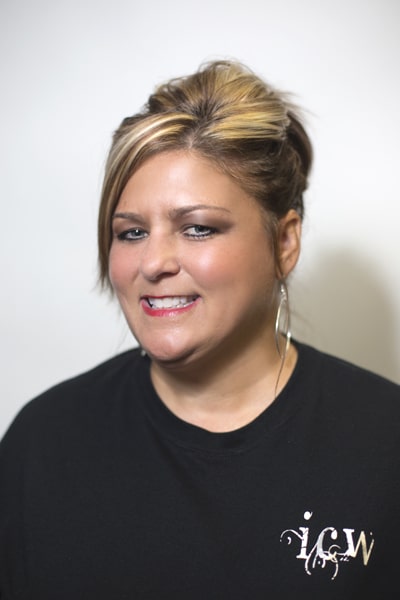 A walking embodiment of that kind of outlook is Nickie Skaggs. Originally hailing from Meeker, Oklahoma, Skaggs still lives in her hometown with her daughter. The graduate of Rose State College in Midwest City, Oklahoma served as a dental assistant for an oral surgeon practice for six years.

“I just like helping people,” said Skaggs on her dental career. “I also liked, for lack of a better term, the details that went into assisting oral surgery. One time, I was so looking so closely at a patient’s mouth and then I realized the surgeon had stopped working. I looked up and he told me he couldn’t see because I was in his way.”

Skaggs put that same attention to detail into a new direction when she accepted a position with the hen-named FireLake Grand Casino’s audit department in 2002.

“I like numbers and I thought it’d be different,” admitted Skaggs. “It was just called the ‘Baby Grand’ when I started. They were finishing what is now the Grand Casino.”

After a few years of crunching the numbers on the gaming side of the Tribe’s business, Skaggs took a position in the CPN Accounting Department. Her competence in that role drew the attention of Indian Child Welfare Department Director Janet Draper, and when a position opened with that department became available, Draper encouraged Skaggs to apply.

“During the years that I have worked here at CPN, Nickie was involved with managing our funds,” said Draper. “She was always friendly, professional and completed our accounting needs.”

Today, Skaggs serves the ICW Department in two capacities; as executive assistant to ICW Director Draper and as the Coordinator for the Healing and Wellness Drug Court. She oversees the court’s records and follows up with participants to ensure they’re attending meetings and adhering to the terms of their treatment.

“It just depends on the situation, but I do everything from filing the paperwork to speaking with those people who are in the court,” she said. “We try to do everything we can to help them get back on their feet or get their kids back, but the one thing that has to happen before all of that is they must want to help themselves.”

Like most of the workload seen by the staff of Indian Child Welfare Department’s various programs, Skaggs speaks of the frustration in seeing the cycle of addiction reverberate through families. Skaggs tells of how some individuals are the third or fourth generation of the same family being involved with ICW.

Yet there are always signs of hope, with the Meeker-native describing those specific cases where individuals
who have hit rock bottom being able to keep themselves on the long road to recovery. She, like many of the staff serving under Draper, serves as a confidant to people who just need someone to provide a bit of  encouragement or a sympathetic ear. It’s those cases that keep people like Skaggs in the job that demands
so much from someone on an emotional level.

“It helps that I work with a great group of people and for an even greater boss in Janet (Draper). Yes, I get down sometimes, but my natural personality is upbeat. I think it helps and I don’t look down on people. A lot of the people we serve have had a hard life, but they’re human beings and they deserve to be treated like it.”

It’s a perspective shared by Draper.

“Nickie is a very positive person who is always willing to go above and beyond. She is extremely funny and keeps everyone laughing. Speaking as a director, this department benefits from her being a part of our team.”

That team continues to show its importance to the wider community each day, one case and family at a time.
If you or someone you know would like more information on the services and programs of the Citizen Potawatomi Nation Indian Child Welfare Department, please visit www.potawatomi.org/services/community or call 405-878-4831.