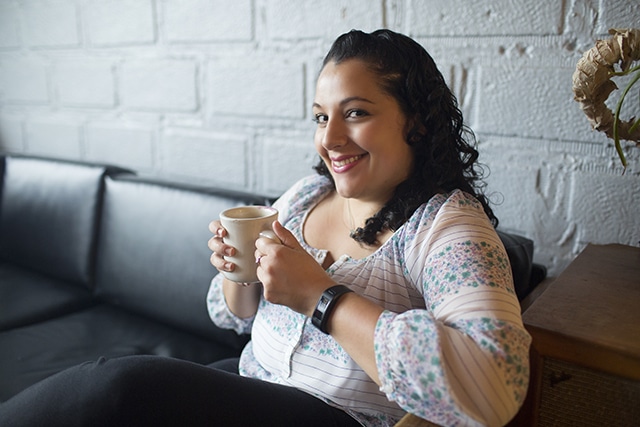 Fueled by an oilfield boom, the Oklahoma City metropolitan area largely weathered the Great Recession that inundated other parts of the country. The recent drop in energy prices has slowed the economy somewhat, yet the city and its surrounding areas continue to grow. Where its younger residents once took flight for professional opportunities in surrounding states, Oklahoma City has become a thriving locale for homegrown residents and out-of-staters alike. One local website, www.TheLostOgle.com, has captured this younger audience’s attention during this time. One of its leading contributors is Marisa Mohi, a Nadeau-family descendent who bills herself as “a Gen Y Oklahoma writer with two master’s degrees and a bad cake habit.”

Mohi is originally from the northern Oklahoma City suburb of Edmond and describes herself as “one of two Iranian-Mexican-Citizen Potawatomi Nation people.”

Her father originally came from Iran to the U.S. in the 1970s for college, while her maternal grandfather came from Mexico and maternal grandmother was Citizen Potawatomi, a descendent of Mary Nadeau.

Currently a business writing instructor at the University of Oklahoma, Mohi describes her work as teaching future professionals how to write business reports and memos.

“I basically try to teach them how to write professionally in the corporate world,” she explained.

Like many of her generation who graduated college in the aftermath of the Great Recession, Mohi’s path to the front of the classroom wasn’t laid out before her as it appears today.

“In undergrad I did English writing and then I went to grad school, because when you get a writing degree in the middle of the recession, you immediately go to grad school,” she said.

By the age of 27, she had two master’s degrees, one in professional writing and another in library and information studies, the pursuit of the latter she attributes to being “a weirdo.”

Her writing background has served her well in her role as a regular contributor to one of Oklahoma City’s popular online sites, The Lost Ogle. Proudly proclaimed as an “obscure” local social blog, the site’s longevity since its 2007 inception is due in large part to its satirical and sometimes biting coverage of topics relevant to younger segments of the city’s population, many of whom feel neglected by the coverage in The Oklahoman, the state’s largest newspaper. An avid reader of the site for years, in 2010 Mohi submitted a contribution poking fun of her home town.

“I don’t hate Edmond, I swear,” she cautioned. “It just irritates me sometimes.”

The success of that initial submission turned into a permanent place at The Lost Ogle, after founder Patrick Riley asked her to become a regular contributor. Even now, as Mohi continues her fifth year of writing for the site, she admits that the reactions to her posts occasionally catch her off guard.

“I can never tell when I’m going to get good or bad feedback. I wrote a post once about a proposed third Wal-Mart being built in Norman, saying that the town didn’t need it because it was going to be down the street from a different Wal-Mart. I got so many positive comments from it and all I could think was ‘People can’t take this seriously, I wrote that in 20 minutes!’”

Her love-hate relationship with her hometown has also proven to be a lightning rod.

“When I wrote an article about the nine grudges I would always hold against Edmond, there were well over 100 comments and 50,000 page views, and I don’t even know why.

“We all love Oklahoma, but we are kind of burnt out on it at this point,” she admitted. “There are so many marketing campaigns about how great everything is, and it is better than it used to be. But we can’t just sweep everything under the rug.”

Her association with the site has also filtered into her professional life. During an interview with the marketing department of OPUBCO, the corporate entity of The Oklahoman, she kept being introduced as Marisa from The Lost Ogle.

“The head of the department shook my hand and told me that it was really interesting what I did, and that they were watching,” said Mohi with a laugh. “I didn’t get the job.”

She’s unconcerned about the impact of her work on her professional aspirations however.

“It has shaped my career, and I’ve been turned down for jobs because of my association with it. But I also don’t want to work for a company that tells me what I can do in my free time. It’s shaped me politically in that I’m less accepting of views that I can tell aren’t sincere. We say things people see or that they don’t want to see. Whether you read The Lost Ogle because you love it or you hate it, you’re still reading it.”

Her writing doesn’t solely revolve around the website though. Along with a partner and fellow writer Kathryn Trattner, Mohi is working on the creation of a prairie gothic literature magazine called Dominion House.

“We wanted to tell some of the darker stories about Oklahoma. I think that we have a really interesting history, but we also have a really gruesome history. Whether you’re talking about Native American tribes, or the Girl Scout murders or how there are six or seven Crybaby Bridge stories in the state. I think there is a lot of creepy stuff that can be told about the Oklahoma landscape.”

An avid short story writer “with a folder full of rejection letters,” Mohi has also worked as a reporter for publications like The Oklahoma Gazette.

“I should probably get back into it,” she admitted, “but it’s not as fun. I have to be a normal person and I can’t write about ghosts or make outrageous claims or whatever else I feel like writing about that day.”

Like all critics, Mohi has taken heat for her views. This doesn’t mean that her love for her home state or its people isn’t sincere though, and she offers a cautiously optimistic look for its future despite the current uncertainty of another year of fiscal shortfalls in the state budget and a cratering energy industry.

“I think there is hope for Oklahoma, but I think it’s going to get worse before it gets better,” she said. “It’s going to take more time and more people calling politicians and corporations out for their actions before things improve.”

With voices like Mohi’s there offering a counter narrative, that better future might be closer than it appears.

If you would like to learn more about Marisa Mohi, visit her at www.MarisaMohi.com