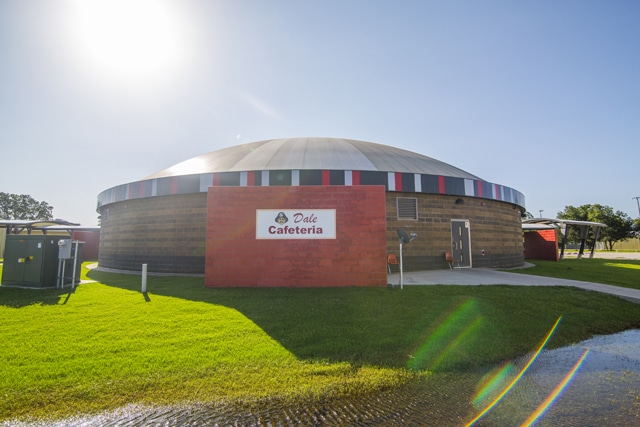 It has been just more than five years since Dale, Okla. first welcomed flowing, treated water from Pottawatomie County Rural Water District 3. Although the community as a whole has benefited from having treated water, the school system has been impacted the most. Dale Public Schools, which serves kindergarten through the twelfth grade, had long been unable to build new facilities
or update existing ones prior to 2009 because the town lacked the necessary water pressure for fire suppression systems like water sprinklers, which are required by law in new construction  projects.

Dale superintendent Charles Dickinson said that improvements have been made since the school system has had access to water sources with increased pressure from Rural Water District 3,   including the construction of a new cafeteria, which also serves as the storm shelter for the school and town of Dale.

“We had to have the water pressure in order to construct this building,” said Dickinson. “It now serves as our school  cafeteria and as a storm shelter. We’ve been fortunate to not have to use it as a storm shelter during the school day, but members of the community have used it to seek shelter after school hours. It wouldn’t have been possible without the rural water district.”

Citizen Potawatomi Nation built a water treatment plant at Grand Casino Hotel and Resort in order to meet its water needs and those of its neighbors.

CPN has supported Rural Water District 3 since 1997, when the rural water district was first created. In 2002, CPN helped the water district secure funding from U.S. Bureau of Indian Affairs Health Services and the U.S. Department of Housing and Urban Development. By May 2005, rural water district members voted in favor of selling the systems assets to the Citizen Potawatomi Nation.

CPN immediately made improvements to the water system which now serves 1,000 customers in an area covering 60 percent of Pottawatomie County and has 285 miles of water line.