This “footlocker” was given to tribal member David P. Johnson upon his arrival at Carlisle Indian Industrial School in 1899. Johnson is pictured here with friends during his time at Carlisle.

Read more about the history of this famous Indian school in an article printed in the March 2013 Hownikan.

Carlisle Indian Industrial School was an Indian boarding school in Carlisle, Penn. One of the first of its kind, it was founded by Captain Richard Henry Pratt at an abandoned military post. The so-called ‘noble experiment’ was a failed attempt to forcibly assimilate Native American children into white civilization. 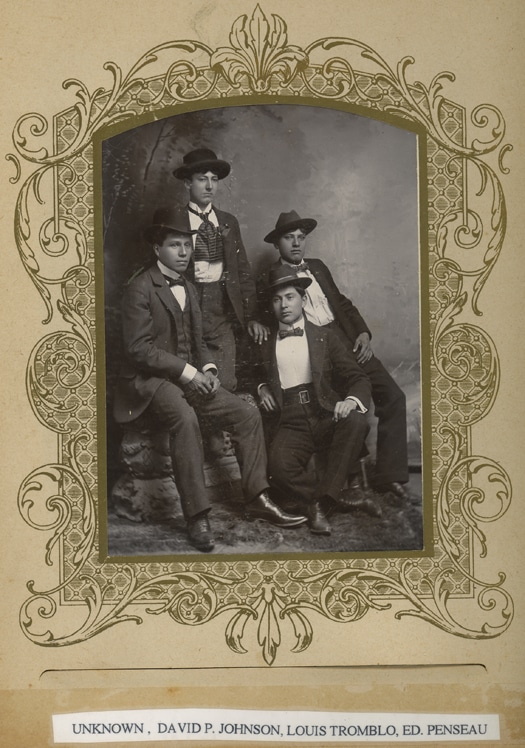 One of the main principles of the school, as Captain Pratt famously said, was to “Kill the Indian and save the man.”

Because of Pratt’s “success” at shaping the Indian’s identity, it later spawned 26 other Indian boarding schools across the country and quickly became a part of U.S. Indian policy. As part of the recruiting process, Pratt would convince the parents of the Indian children that the reason why the white men were taking their land was because Indians were not educated enough.

In the beginning, parents were voluntarily let their children go. However, over time, parents were coerced and often forced to send their children to Carlisle. After the new recruits arrived at the school, the Indian children would take before and after pictures, primarily to show the progress of the school and its success at assimilating the children.

Carlisle was modeled on the military lifestyle with Indian boys wearing uniforms and girls Victorian style dresses. They marched to and from class and the dining halls. The boys and girls were organized into companies with officers who took charge of drill while discipline at the school was strictly enforced.

Carlisle was structured with academics for one half of the day and instruction in trades the other half. In the summer months, rather than letting the children go back to the reservations, the school implemented what was known as an ‘outing system’, where the students would work for a non-Indian family for the summer and return back to Carlisle to begin the new school year.

This was yet another part of the detribalization process. By the time Carlisle closed in 1918, over 10,000 Indian children had gone through its doors. The results of this era presented ever-lasting, negative effects on the Indian student’s sense of cultural identity. Subsequently, the oppression of their Indian identities often could not be reversed and they ultimately entered a world outside of Carlisle confused and lacking self-worth. Although the negative experiences among