“This agreement saves money for Pottawatomie County’s first responders from as far north as the Pottawatomie County Sheriff’s Offi ce to the Asher Police Department,” explained Tribal
Chairman John “Rocky” Barrett  after the official signing ceremony. “It’s the right thing to do. We all live in the county together and CPN has the ability to provide the service that our members and neighbors will benefi t from.”

Pottawatomie County’s 911 authority, like many around the country that rely on taxes from landline telephone users, has felt the decline in revenue as cell phones become more prevalent. The state legislature’s unwillingness to raise taxes on cell phone plans that might help fund these essential operations has resulted in increasing budget constraints for the dispatch system.

Discussions for a merged center based out of the City of Shawnee Police Department dragged on for years, with both sides unable to come to an agreement. 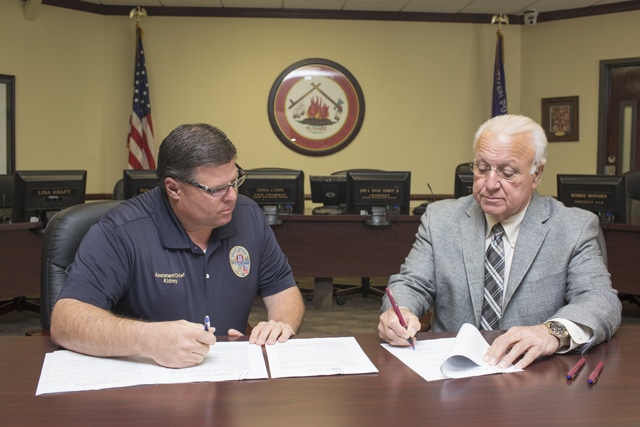 In February 2015, Tribal Chairman Barrett proposed that CPN could cover the system’s estimated $350,000 budget and would hire the current dispatchers on as Tribal employees while the Tribe would adapt county-set call protocols.

“The people will be taken care of,” said Dr. Jim Collard, chief of the CPN Tribal Police Department. “No other emergency service will pay a nickel to be dispatched from our call center, which means they can put the funds towards serving and protecting the people of Pottawatomie County and their respective communities.”

The Pottawatomie County 911 Trust will pay CPN from the revenue on fees from landline, wireless and Internet calls for services, while a portion of the county’s current one cent sales tax will fund County 911 Director Tommy Arnold’s salary. The agreement between CPN and the county 911 system trust authority has an initial five year term, and an automatic renewal clause, with a one year notice for early termination.

While some critics of the agreement had hoped for a unifi ed call center to be based in the Shawnee Police Department, the overwhelming support from the county’s first responders in support of CPN’s proposal was impactful. The presence of two call centers also provides the county with a backup 911 dispatching service should the worst happen.

“As we’ve experienced in recent years with severe weather, having two, geographically separated 911 dispatch centers is more effi cient in the long run. If one center happens to be hit by a tornado, or experiences a technical glitch, the county’s first responders still have a secondary way to communicate with the communities if we have two systems,” explained Dr. Collard.

Construction on expanding the CPN Tribal Police Dispatch Center is already underway, with crews laying new walls and cement at the location next to FireLake Discount Foods. Officially, the agreement specifies the switch took place on May 31, though current 911 dispatching will continue from the trust’s Tecumseh location until the CPN expansion is completed in August.