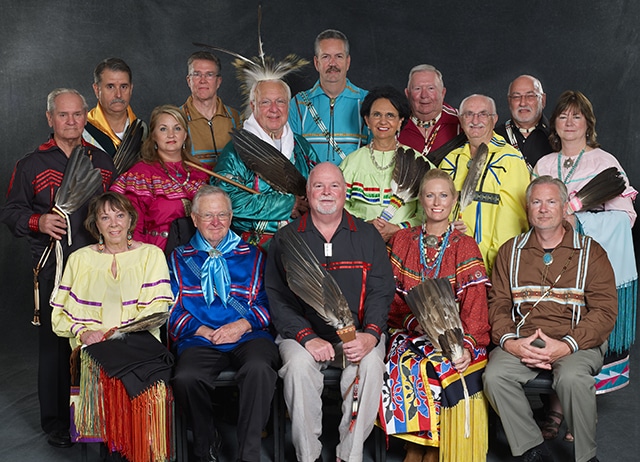 With a full audience comprised of Tribal employees and Tribal members, as well as the 2015 class of the  Potawatomi Leadership Program, the CPN Legislature met for the first meeting of the 2015-16 legislative session.

Derek Valdo, CEO of AMERIND Risk Management made a presentation to the legislature, before a resolution approving a memorandum of understanding between CPN and AMERIND Risk Management Corporation was approved by a unanimous vote. The MOU will offer property and casualty insurance products to persons residing within the former reservation boundaries of the Tribe.

The CPN Self-Governance Department also made a presentation on the Bureau of Indian Affairs and Indian Health Service’s funding agreements and the status of recent grant applications made by the department.

According to the report, in the 2014 Fiscal Year CPN received full funding for contract support costs from the Bureau of Indian Affairs and the Indian Health Service, while the CPN Tribal Court and Employment and Training Program also received small one-time increases as well. While contract health services and Tribal environmental health projects did receive funding increases, a five percent cut in base funding for these two programs was lost due to the 2013 sequestration implemented by Congress. These funds will never be restored.

A resolution accepting a proposed settlement between CPN and Glaxo- Smith-Kline, LLC was also approved with 16 in favor and none opposed. Legislators also approved CPN’s membership into the United Nations of Oklahoma, Kansas and Texas, including the confirmation of delegates and payment of membership dues.

In Potawatomi Gathering news, the legislature approved transportation costs for Tribal members attending the twenty second annual gathering of the Potawatomi Nations hosted by the Forest County Potawatomi in Carter, Wisconsin. In addition to transportation costs, the resolution also appropriates monetary support for the host nation or a scholarship fund. In membership news, the legislators approved a voluntary relinquishment of Tribal citizenship by Gabrielle Kay Nuckolls.

If you would like to learn more about the CPN Legislature or watch the recordings of the meetings, please visit www.potawatomi.org/government/legislature