A sold-out field including 120 of the world’s best bowlers will resume competition when the Professional Bowlers Association returns to FireLake Bowling Center and the Grand Casino Hotel and Resort May 9-17 for the second annual Oklahoma’s Grand Casino Hotel & Resort PBA Summer Swing.

The Summer Swing will include four PBA Tour title events plus a special Oklahoma’s Grand Casino Hotel & Resort King of the Swing finale, all of which will air on CBS Sports Network. The finals will be contested in a special bowling arena installed inside the Grand Casino Event Center while the preliminary rounds will be hosted by the FireLake Bowling Center and covered by PBA’s online bowling channel Xtra Frame.

The Summer Swing will again include four PBA Tour title events – the Wolf, Bear and Badger Opens and the PBA Oklahoma Open. The Oklahoma’s Grand Casino Resort King of the Swing special event will feature the four winners plus a “wild card” player. 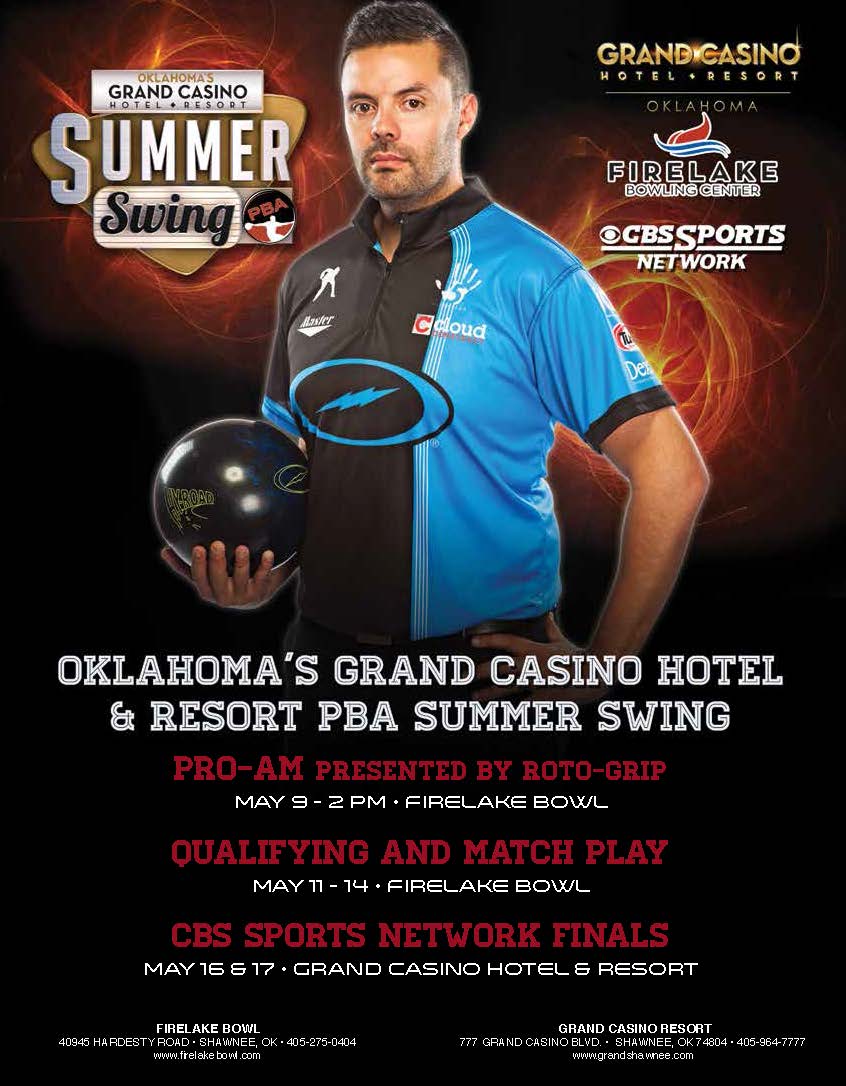 Heading into the Summer Swing, Belmonte is the front-runner for a third consecutive PBA Player of the Year title, a feat that hasn’t been accomplished since Walter Ray Williams Jr. won the PBA’s highest annual honor in 1996, ’97 and ’98. The only other player who has earned POY honors three years in a row was the late Earl Anthony, who did it twice (1981-83 and 1974-76).

Through the first 10 events of the 2015 campaign, Belmonte has won the first two major titles of the season (the USBC Masters and Barbasol PBA Tournament of Champions) to take the lead in the PBA Tour earnings race ($152,161 vs. $106,710 for current runner-up Chris Barnes of Double Oak, Texas) and is fifth in scoring average (231.46 vs. the 234.59 pace by leader Rhino Page of Dade City, Fla.).

In its brief three-year history, the PBA Summer Swing has established itself as one of professional bowling’s most demanding competitions. It involves three unique “animal pattern” lane conditions to test a variety of bowling skills, and requires players to excel on all three scoring environments in order to advance to the Oklahoma Open, where the three match play rounds are contested on each of the three lane conditions.

“The Summer Swing has quickly become one of the hallmark events on the PBA Tour calendar,” said PBA Commissioner Tom Clark. “It’s a great competitive challenge for our members, it has a great sponsor in the Citizen Potawatomi Nation and Grand Casino Hotel & Resort, and it will provide PBA fans around the world with more than 50 hours of live coverage on Xtra Frame in addition to 10 hours of nationally-televised coverage on CBS Sports Network.”

All qualifying and preliminary match play rounds of the PBA Summer Swing will be covered exclusively live on Xtra Frame. Three-day ($3.99), monthly ($7.99) and 12-month XF Season Ticket ($64.99) subscriptions are available.

CBS Sports Network is available across the country through local cable, video and telco providers and via satellite on DirecTV Channel 221 and Dish Network Channel 158.  For more information, including a full programming schedule and how to get CBS Sports Network, go to http://www.cbssportsnetwork.com/
Fans can also catch a recap of last year’s Oklahoma’s Grand Casino Hotel and Resort PBA Summer Swing by visiting PBA’s Youtube channel at https://www.youtube.com/watch?v=nVavkPbUzAI

For fans who will be attending the Summer Swing, individual day passes can be purchased at http://www.grandboxoffice.com/event?eventid=66 for $25.

Day passes are for general admission seating in the balcony overlooking the two-lane bowling installation, and are good for all telecasts happening the day of purchase. Weekend passes can be purchased at http://www.grandboxoffice.com/event?eventid=65. Tickets are $60 each, allow access to all finals conducted over the weekend, and will be good for general admission seating on the first floor bleachers next to the lanes.