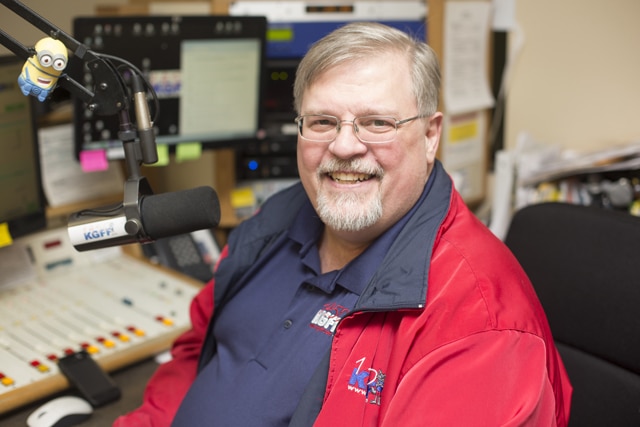 In the digital age, every new car comes with an outlet for an iPod or smartphone, while many new models also boast XM satellite tuners. On the more traditional broadcast channels like FM radio,  multinational conglomerates own dozens of stations around the nation, responsible for a uniformity of programming that is unseen in American history. Yet there remain a few voices focusing on local news for those outside the major metropolitan areas, broadcasting as much as their wattage allows KGFF’s Mike Askins, who has been on the air since the Carter Administration, is one such voice, well known to many in Pottawatomie County.

“I worked in Stillwater at KVRO, but most of my life has been spent here, born and raised in Shawnee, Okla.

“I’m a Cherokee descendant on my mother’s side of the family. My maternal grandfather and his mother spoke Cherokee and Mvscogee Creek. I have forgotten nearly everything I heard as a kid, I only remember bits and pieces.”

“I went to Oklahoma Baptist University because I had free tuition, but I but dropped out to become an extremely well paid disc jockey… that hasn’t worked out so far.”

On why he got on the air…

“My dad was a disc jockey in his hometown of Duncan, Okla. When he moved to OBU for college, he was on the air at the college radio station before working for KGFF in the mid- 1960s while also working as a teacher at Shawnee High School.

“My dad was the speech and drama coach at the high school and thought the best way to teach his students was to demonstrate that on the radio. He had a nighttime show, and one of the first memories I have was seeing him do his radio thing and thinking that it would be fun.”

“I went to OBU to study church music, but did speech and drama too. I got on the radio for the public speaking part of it.

“I always had an aptitude for electronics. I was a HAM Radio operator before I got into broadcast radio. So I would always hang out with the radio engineers when my dad was on the air and have them show me how to do stuff, and so a lot of my training came from on-the-job training.”

On being inspired by Wolfman Jack or Dr. Johnny Fever…

“Sadly I’m going to have to say Wolfman Jack because He was the guy I watched on the Midnight Special. He had that patter, that way of putting things together that couldn’t be matched.

“I was teased that I was more like Johnny Fever by my friends, but Wolfman probably inspired me to do more talking on air.” 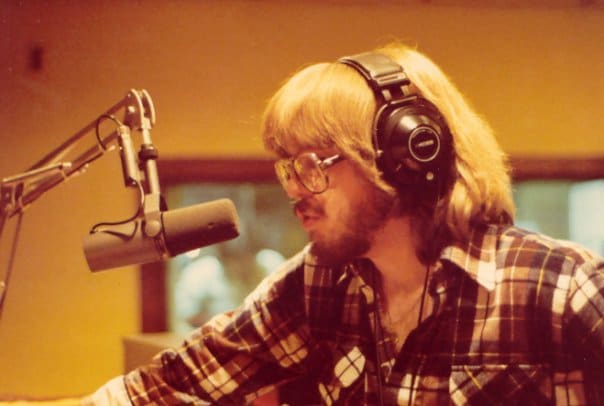 On the most compelling on-air story he’s covered…

“I was live on the air during the May 2013 tornado, having come back into town from Saint Louis, Mo. and heard the warning sirens. I pulled into my house, which is on the north part of town near the Shawnee Mall. I could see the tornado’s debris field as it hit Steelman Estates Trailer Park.

“I drove to our transmitter site to make sure we stayed on the air, and did live reports while our in-studio DJ James Nicholson, did his reports from there. The saddest thing was that James lived in Steelman Estates. While he and I were on the air, he lost his home. We didn’t drop off the air until after the tornado passed, and that only happened because a lightning strike hit the tower while I was sitting right next to it.

“We also had a tornado in 2011 that hit the Tecumseh area and I was on the air in the studio. They came in and said that we were evacuating back into the freezers of FireLake Discount Foods, which is next to our location. But I stayed on the air, because this studio is a pretty good chunk of concrete.

“I later got a phone call from somebody who said they didn’t know what was going on that day and turned on KGFF and heard me say ‘Take cover now!’ They literally watched their house go away as they went down the stairs to the basement. They called back and told me that I saved their life.

“It’s one of those moments that you say, ‘Okay, I am doing something right.’ “That’s your justification for all the years of telling bad jokes on the radio.”

On his time with KGFF…

“I’ve been with KGFF since 1976 when I started as a high school reporter in a 15-minute show with my buddy.

“The Tribe bought us in 1998, taking over full time in 1999. They bought the license, a few pieces of equipment and me.”

On running an AM broadcast in the digital age…

“Localism is a thing I fight for. I was fortunate enough to be chosen by the Federal Communications Commission to testify on the importance of localism in broadcasting.

“Satellite radio is just fine for music and entertainment, but stations like KGFF were licensed to serve the public interest. We do that by talking about what is happening with a local school group or Cub Scout pack, local issues and things are important to segments of the community are just things you can’t get from satellite radio.

“Even compared to our competitors in Oklahoma City who have to cater to a wider, statewide audience, we keep it Shawnee and Pottawatomie County focused.”