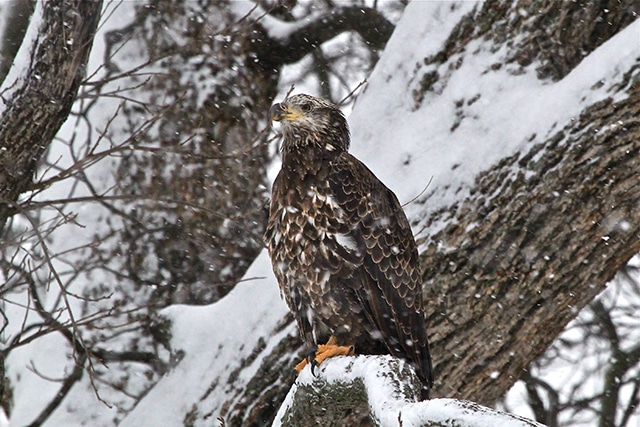 Snow and below freezing temperatures are still expected this time of year in Oklahoma, but spring is closer than the 20-degree morning today might suggest. In the hollow of the old pecan tree behind the aviary, you can just barely see the face of the Great Horned Owl. She has most likely laid 3-4 eggs and is now brooding them. Several of the eagle nests that we began monitoring in early December already show signs of activity and at more than half of those nests pairs of eagles are already present. Most nesting bald eagles in Oklahoma will have eggs in the nest in January. Some of our resident eagles have been nest building but so far no eggs have been laid.

Wadasé Zhabwé continues to visit the aviary from time to time and we are beginning to rely on her far more than the local weatherman’s forecast. We may go several days or a week without seeing her, but in the days prior to a significant winter storm she arrives a day ahead of the weather. One recent week, the forecast indicated ice and the possibility of snow along with extreme temperatures on a day we planned to travel to several nest sites in the northeastern portion of the state. We were concerned that travel might become an issue. However, we decided since we had not seen Wadasé, the weatherman was off just a bit in his forecast. Although we did have the cold temperatures, there was no precipitation. Wadasé was right.

Checking her telemetry we noticed once again that she has followed adult eagles to local areas near nest sites. The dates for the previous year’s visit are within a week of her trip there this year. Curiously, she follows them as they migrate to their nest sites. She has visited nests in Maud and in Spencer.

She has led us to more than half of the Bald Eagle nest sites we currently monitor today. On our own trips to monitor those nest sites, we wanted to check out some of the other sites that she has frequented along the way. Arriving at Horseshoe Lake, an OG&E hydroelectric power plant, near Harrah we noticed a large eagle nest with an adult perched beside the nest. 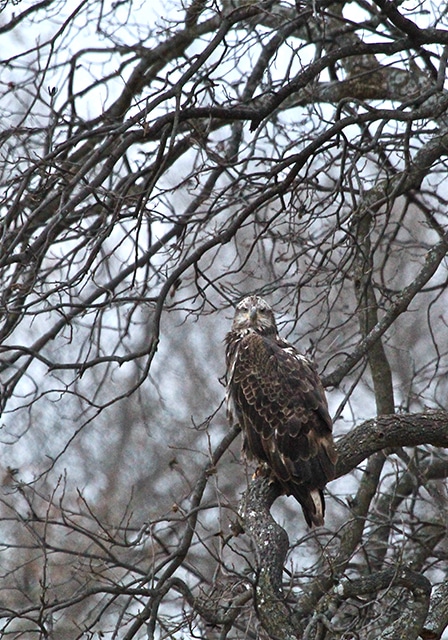 Telemetry data shows that she has frequented the area several times near the lake and the river around this nest. The lake is private and closed to the public but there were hundreds if not thousands of ducks and coots visible in the water and protected pastures that surrounds the lake. Even if the lake was not stocked for fishing there is no shortage of food. It was easy to see why she was spending time there.

Continuing on to check the nest in Spencer, we spotted three eagles flying together near the river. The glare of the evening sun made any identification difficult.  We stopped in the middle of the road to get a better look with binoculars and could clearly see two adults but had lost sight of the third.

Turning around to follow in the direction they were flying, we again spotted the third eagle, which had altered its course and separated from the adults. A sub-adult, who for a moment, seemed to respond when we vocalized, continued down the channel of the river and was quickly out of sight. At that distance we could not make out any telemetry on the bird. Could it have been Wadasé? We were almost positive but we would have to wait three days to confirm the sighting when we downloaded her telemetry. We of course marked the map with time and date and waited.

Three days always seems like weeks when waiting on her telemetry. When the time came to load the GPS data into the map we were ecstatic to learn we had in fact seen her. Perhaps that slight deviation from her path on the river and the turn towards us was a nod of recognition.

We hope she is able to learn from the adults that she follows to nest sites, as they have been successful in fledging young. These eagles have chosen nest sites that are in somewhat remote areas that are hard for people to access directly and have abundant sources of food to support adults and growing chicks. We hope that the GPS backpack stays on long enough to know where Wadase chooses to nest. As we approach the two-year mark of her release, we continue to receive consistent telemetry data from her backpack and hope to have at least two more winters’ worth data.

To follow her movements with us you can visit www.arcgis.com/home and search for “Potawatomi eagle.” Send your encounters with Wadase or any other eagles in the state or wherever you may be to Jennifer.randell@potawatomi.org.