Grand employees mark another year of giving to the Salvation Army 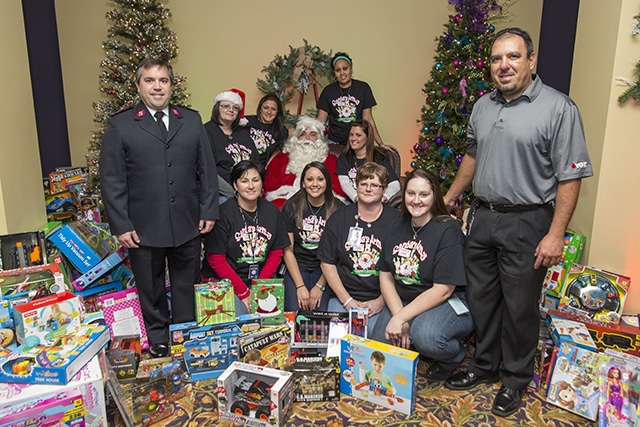 Since 2009 the Grand Casino Hotel and Resort has been collecting Christmas presents from employees for the Shawnee Salvation Army to distribute to children throughout the community. The toys donated by employees, worth at least $10, qualify them for a raffle prize drawing at the Grand’s annual Christmas event.

This incentive, coupled with the holiday’s giving spirit, has continually resulted in hundreds of toy donations each year, and 2014 was no exception.

“We can always count on the generosity of our employees, some of whom brought in multiple toys because it’s going to a great cause,” said Grand Casino General Manager Joe Garcia. “The Salvation Army is a good organization and this will benefit a lot of children and families in our communities.”

Captain Philip Canning of the Salvation Army’s Shawnee, Okla. branch is a regular attendee at the Grand’s holiday festivities for employees.

“These toys will be given directly to children in our service area of Pottawatomie County as well as parts of Lincoln and Seminole counties,” said Canning. “This year we will be serving many kids during Christmas and these toys are a great help.”

According to Captain Canning, the toy donations from the Grand will go toward the Salvation Army’s service to approximately 888 kids this year alone.

Canning continued, “I just want to say thank you to CPN not only for their support at Christmas time but they’re great supporters of the Salvation Army throughout the year. Without them we would only be able to do a fraction of what we do.”

If you would like to learn more about the toy drive or other services offered by the Shawnee branch of the Salvation Army, call 405-254-1100.