The U.S. Military is made up of five organizations that instill pride in their members because of history, mission, capabilities and respect earned in the service of the Nation. That pride is seen in the customs, courtesies and traditions of the military service.

Customs are established practices of things you should or should not do. Some of these customs are written regulations and others are not, but they are all to be obeyed just the same.

For example: never criticize your service or leaders in public, never go over the heads of your superiors (chain of command), never offer excuses, never avoid saluting officers or participating in raising or lowering of the flag.

The salute is widely misunderstood outside the military. It is not a gesture of servility, but an expression of recognition of each other’s membership in the profession of arms.

Enlisted servicemen and women salute all officers, and all officers salute senior officers. A salute is also rendered when the National Anthem is played, at changes of commands and funerals, when pledging allegiance to the U.S. flag (and veterans can hand salute during this pledge), when boarding or departing a naval ship.

There are many other customs and courtesies that are too numerous to list here, but are learned through living with them during military service. As veterans we remember these with fondness and pride.

One Tribal member learning of these traditions is Choctaw, Okla. native Caleb Jay Anderson. Caleb is in his third year at the U.S. Naval Academy and is a Midshipman 2nd class. We thank Caleb for his service and wish him the best of luck in the upcoming academic year.

Don’t forget we have our Vietnam War Era Veterans Memorial Banquet coming up in 2015. It is to honor the Citizen Potawatomi Nation men and women who served in the U.S. Armed Forces during the Vietnam War Era (5 August 1964 to 7 May 1975).

Members of the Citizen Potawatomi Nation who were in the military during that time and would like to attend this Memorial Banquet please see the ad next to this column.

Remember the CPN Veterans Organization meets every month on the fourth Tuesday at 6:00 p.m. (or as soon as you can get there) in the North Reunion Hall on the Potawatomi Powwow Grounds. All CPN veterans and their families are welcome. 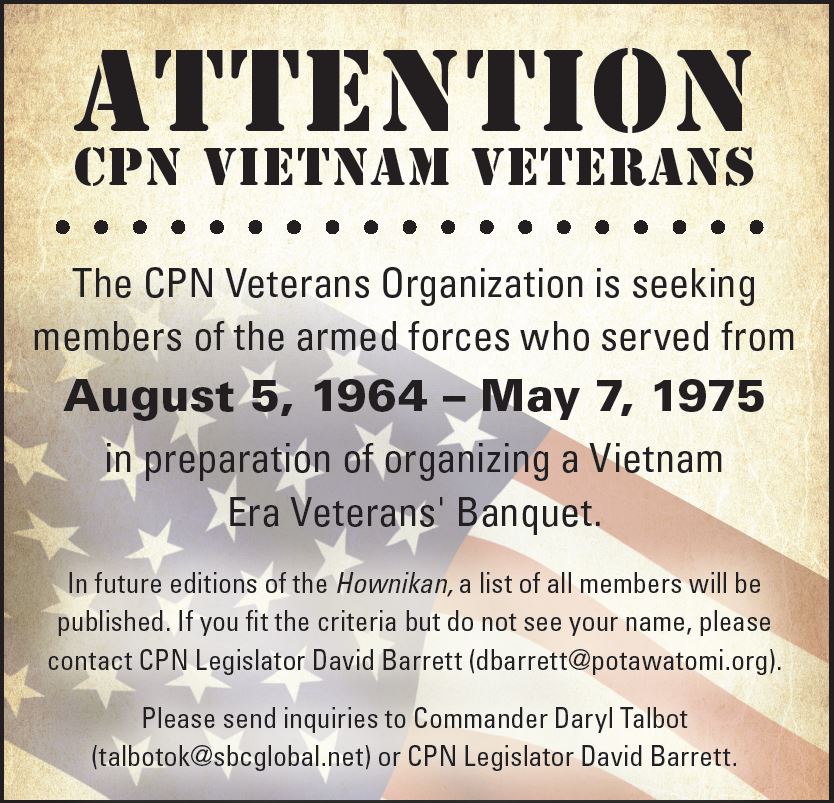